San Diego County Amber Alert StandoffA tense standoff between San Diego CHP and a man suspected of killing his wife and taking his children on a dangerous ride that ended with SWAT tackling him on a freeway overpass. For the full story, including a photo gallery: http://www.myfoxla.com/story/27597226/amber-alert-police-stop-car-on-freeway-standoff-underway-in-missing-children-case2014-12-11T18:08:28.000Z

A man on the run with his four children after allegedly murdering his wife was captured today after a dramatic highway standoff broadcast on live TV. Cops located what they believed to be Daniel Perez, 43, in his car with his kids in Santee, San Diego County, on December 11. After a brief chase, a standoff ensued. Daniel released two of his sons to cops but remained in the car with the other two. Less than hour later, Daniel emerged, as did his other two children, who ran from the car. Daniel was quickly taken into custody. You can watch dramatic footage of the standoff above.

1. Daniel Perez Tried to Jump Off of a Bridge Before He Was Arrested

Daniel was talking on his cellphone while he attempted to flee on foot when he left his car on the highway. He was quickly swarmed by SWAT team members. Daniel tried to jump off the freeway bridge before cops were able take him into custody. The San Diego Union Tribune reports that while cops were pursuing Daniel, he inexplicably stopped on a highway bridge, the paper further reports that cops don’t know why he stopped.

His car was first located by California Highway Patrol officers due to a ping from a Daniel’s cellphone, which means he had briefly turned it on.

2. Erica Perez Has Been Found Dead in the Trunk of the Family Car

On the night of December 10, a body, believed to be that of Daniel’s wife, Erica Perez, was found dead in the trunk of a car, according to the Montebello Police Department. The car was located about a mile from the family home in Montebello, California, close to Los Angeles. Daniel Perez is suspected of killing his wife, reports Fox San Diego. The car, a Honda Accord, is owned by Daniel Perez. The boys were last seen on the night of December 6 when Daniel, alone, picked them up from a relatives house.

ABC Los Angeles reported on December 15 that Perez was pleading not guilty to kidnapping in the case. Perez said that his wife attacked him with a knife and that he killed her in self-defense. Authorities believe that Erica Perez was killed on December 5.

3. Daniel Perez Had a History of Abusing His Wife, Say Family Members

Daniel and Erica Perez are believed to have been in the process of divorcing. ABC 10 reports that there was a history of domestic violence between the couple. Prior to disappearing, a friend told ABC Los Angeles that Daniel had seemed “despondent.”

4. He Was Staying in a Hotel With His Kids Prior to Being Captured, Say Cops

There had been an Amber Alert out for the Perez’s sons, Alex, 6, Tristin, 8, Jade, 9, and Jordan, 11. The alarm was first raised when the boys didn’t show up for school on December 8. The children’s aunt, Pamela Valdez, had made an emotional plea for the boys’ return:

Please, Daniel, please just drop the kids off. Don’t hurt them please, they are innocent. … You’re breaking our hearts.

The California Highway Patrol believed that Daniel had been staying in a hotel with his kids in the San Diego County area. A neighbor told KTLA (above) that the couple vanished so fast that they still had clothes in the communal laundry facilities. The same neighbor added that the family were quiet and kept to themselves but had already decorated their home for Christmas.

5. The Four Boys Are Now Safe

Breaking: Daniel Perez is now in custody and four sons are safe with CHP. Santee on 67 South. #AmberAlert @CBS8 pic.twitter.com/KktjW48YWL

The four boys are all safe and unarmed. A relative had told ABC Los Angeles that Daniel “wouldn’t hurt his children, he loves his children. His children mean everything to him. We’re just worried.” An anonymous person who watch the dramatic standoff on TV has started a crowdfunding effort for the Perez boys. 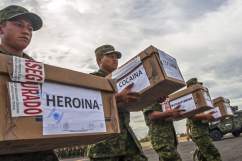 Read More
5 Fast Facts, Breaking News, California, Crime, Murder
A man on the run with his four children after allegedly murdering his wife was captured today after a dramatic highway standoff broadcast on live TV.