It was announced Wednesday that Daniel Pantaleo, the cop who held father-of-six Eric Garner in a chokehold before he died in August, has not been indicted by a Staten Island grand jury.

He was filmed by a friend of Garner approaching the 350-pound asthmatic man from behind and then taking him to the ground in a chokehold. The Staten Island man complained that he could not breathe, and Pantaleo can be seen pushing Garner’s face into the ground. The confrontation happened after Garner had been stopped by police for selling untaxed cigarettes.

The medical examiner ruled that Eric Garner’s death was a homicide caused by the chokehold, a maneuver that has been banned by the NYPD since 1993.

Two men were awarded $15,000 each from the city after suing for an incident when, “Pantaleo and/or Conca pulled down the plaintiffs’ pants and underwear, and touched and searched their genital areas, or stood by while this was done in their presence.” He has also been sued for wrongful arrest in a case that has yet to be settled by a man who claims he was stopped and detained by Pantaleo without sufficient reason.

Pantaleo has been placed on desk duty since Garner’s death, and may still face further disciplinary action from the NYPD.

Pantaleo released a statement through his union in the wake of the decision, saying

“I became a police officer to help people and to protect those who can’t protect themselves. It is never my intention to harm anyone and I feel very bad about the death of Mr. Garner. My family and I include him and his family in our prayers and I hope that they will accept my personal condolences for their loss.” 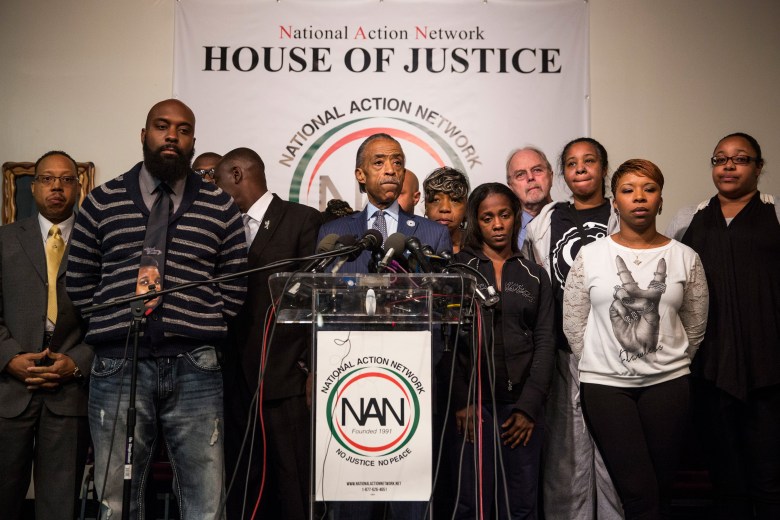 Reverend Al Sharpton and members of the Brown, Gurley, and Garner families attend a press conference on the eve of Thanksgiving to pray and address the events of the last few days regarding the grand jury verdict of police officer Darren Wilson on November 26, 2014 in New York City. (Getty)

Grand juries are designed to determine whether there is sufficient evidence to bring a case forward to trial, hearing evidence from the prosecution with no contribution from defense lawyers.

In this case, the 12-person jury saw the widely-viewed video of the incident, and heard testimony from Pantaleo and other officers. Only Pantaleo was up for indictment, with other officers receiving immunity. All 12 members of the jury had to agree for a decision to be made.

Bill de Blasio released a statement Wednesday saying “Today’s outcome is one that many in our city did not want. (…) The grand jury is but one part of the process (…) Should the federal government choose to act, we stand ready to cooperate.

While unlikely to spark a Ferguson-level reaction like the Darren Wilson grand jury decision, there may be protests in Staten Island and across the city. Police Commissioner Bill Bratton have warned that violent unrest will not be tolerated, and Public Advocate Laetitia James urged that people remain calm.

A lotttt of NYPD officers gathering around Union Square after the #EricGarner decision pic.twitter.com/hnF6r5N6PT 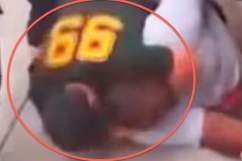 Loading more stories
wpDiscuz
4
0
Would love your thoughts, please comment.x
()
x
| Reply
The NYPD officer accused of holding Eric Garner in a chokehold before his death has not been indicted by a grand jury.