Tallahassee police have arrested and charged a man with causing the hit-and-run crash that sent a beautiful teenager into a coma. Devon Dwyer, 20, was taken into custody on the evening of December 1 while 18-year-old Jackie Faircloth remains in critical condition.

Jackie Faircloth pictured on her Facebook page in April 2013.

According to a police press release he’s charged with hit and run and leaving the scene of an accident. You can read the full arrest affidavit here:

The affidavit states that after being hit by a pick-up truck after 1:30 a.m. on November 29, Jackie Faircloth suffered “major head trauma, serious chest injury, broken jaw, and a broken ear drum.” She was rushed to hospital and underwent emergency surgery to “release pressure (swelling) on her brain.” Her brother, John, who witnessed the crash told cops that he saw his sister get hit and that the “impact knocked her up in the air and she impacted the left side of the hood, windshield, driver side mirror.”

2. Dwyer Allegedly Told a Friend ‘It’s Not My Fault. She Stepped in Front of the Car’

Dwyer was turned in by a passenger who was in his car on December 1 who was traveling in his SUV when he allegedly hit Faircloth, according to documents. The friend, Jacob Salow, told police that he wasn’t coming forward for the $20,000 reward being offered by Faircloth’s parents in relation to the accident. His lawyer said that Salow would rather see the money go towards Faircloth’s medical bills.

According to his Facebook, he works at Potbelly’s as a bartender with Devon Dwyer. He’s also a student at Florida State University.

Jacob Salow pictured on his Facebook page in July 2014.

Salow told police that he was looking down and texting when the car hit Faircloth. After the impact, Salow said that Dwyer became “very panicky.” Salow added that Dwyer said to him, “It’s not my fault. She stepped in front of the car.” Prior to the accident, Dwyer and Salow were driving to Salow’s girlfriends house. After the incident, Dwyer drove to a friends house and was seen yelling at them about how he needed to hide his car. Subsequently Salow says he saw Dwyer’s friends moving cars around so that Dwyer’s truck could be parked behind a house. When he was done moving his car, Dwyer asked Salow’s girlfriend for a ride home which she obliged. The accident wasn’t mentioned to Salow’s girlfriend. The following day the two were working together at the Potbelly’s, Dwyer asked Salow at one point, “Are you okay? Are you good?” That was the last time Salow saw Dwyer.

After Salow gave his statement to police, cops went to Dwyer’s home on Cactus Street in Tallahassee to arrest him. There they found his red pick-up truck with damage to the hood. When they knocked on the door of his home, his roommate, Ryan Dooley, told police that Dwyer had already gone to the police station to confess.

Faircloth, a cheerleader at Plant City High School in Tampa, is in a medically induced coma after the accident. WCTV reports that her brother witnessed the whole crash and saw his sister being left for dead in the street. She had been visiting her brother, a student at FSU, over the weekend.

4.Earlier in November, He Posted on Facebook About Negligent Drivers

On November 5, he posted a Facebook status update about how he witnessed an “avoidable accident.”

5. He Played High School Football at the Same School as Blake Bortles

According to his Facebook page, Dwyer was a high school football player at Oviedo High School in central Florida, the same program that Jacksonville Jaguars QB Blake Bortles went through.

Devon Dwyer suited up for his high school team, the Oviedo Leathernecks. (Facebook) 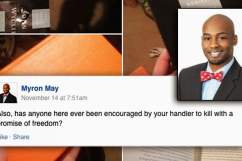 Myron May: Top 10 Facts You Need to Know