The post went viral, drawing huge criticism for targeting the teenagers, and it emerged Monday that her resignation was “in the works.”

Here’s what you need to know about what she said, the backlash, and her own teenage indiscretions:

1. She Said That the Obama Girls Dressed Like They Deserved ‘A Spot at the Bar’

In a status posted to Facebook before being quickly deleted, Lauten attacked the president’s 13 and 16-year-old daughters for their clothing and behavior during the televised turkey pardoning. 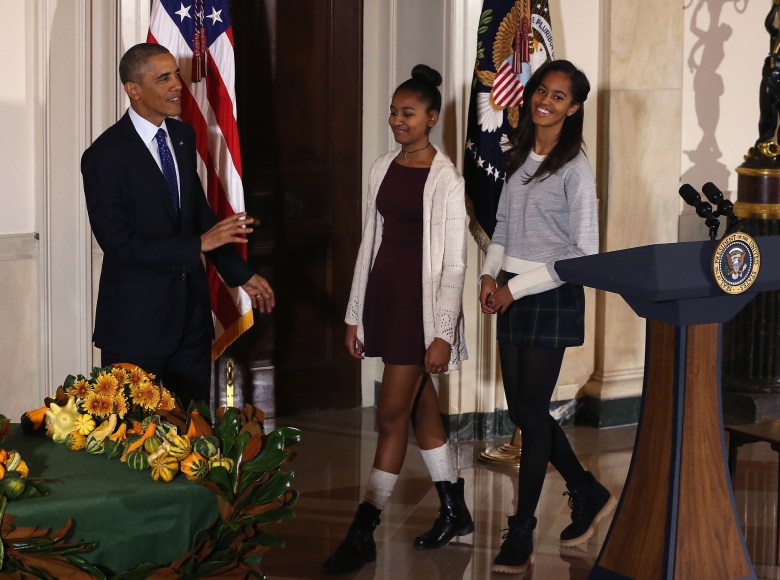 Sasha and Malia look on as President Barack Obama speaks after pardoning “Cheese” and his alternate Mac, during a ceremony at the White House. (Getty)

The girls both wore skirts, Sasha wearing a dress with a long cardigan and Malia wearing a skirt, sweater, and thick tights. Lauten seemed to imply that these were outfits more suited to the bar than the White House, a controversial comparison given the girls’ age and the unremarkable nature of their outfits.

She said that Sasha and Malia Obama should “try showing a little class”, showing a focus on ‘classiness’ that is featured heavily on her Twitter. Under the handle @DCGOPGirl, she professes to “Love GOD, cats, @DCMetroChurch, @JLWDC, the DAR & all things pink, green and pearls!”

She posts extensively about shopping at Lilly Pulitzer and Kate Spade New York, among others, and often captions her pictures with #preppy.

2. She Was Reportedly Arrested for Shoplifting During Her Own ‘Awful Teenage Years’

The Smoking Gun said Monday that they had obtained court records showing that Lauten herself had been arrested for misdemeanour larceny after shoplifing from a local department store in North Carolina at the age of 17.

Older than both girls at the time of her reported arrest, this incident adds deeper meaning to the statement in her apology that, “I quickly judged the two young ladies in a way that I would never have wanted to be judged myself as a teenager.”

The Smoking Gun says, “Since Lauten was just another teenager caught shoplifting at the mall, it appears unlikely that she was publicly pilloried for her lack of class, nor were her parents criticized as poor role models.”

Lauten, who graduated from Eastern Carolina University with a degree in Classics, first worked in Washington with lobbying firm Fierce, Isakowitz & Blalock, before taking a job with former Illinois Republican Rep. Joe Walsh.

She then became press secretary to Rep. Fincher, the position she held until resigning this morning. A May 2013 Roll Call article describes how Lauten visited 40 Capitol Hill offices to share her “social-media savvy” during a recess week.

Citizens For Responsibilty and Ethics in Washington (CREW) named Fincher as one of 2011’s “Most Corrupt” members of congress.

4. She Told NBC News Monday That Her Resignation Is Already ‘In the Works’

I'm heading out to a bar in DC tonight…I can't help but to wonder what would @DCGopGirl say to wear…maybe burlap & mukluks?

After a weekend of outrage on social media, NBC announced that had told them by phone that she was in the process of resigning her position.

In the backlash that followed her statement, Tom Adelsbach, a graphic designer, tweeted an unflattering photo of a woman he claimed was Lauten, holding a beer bottle in her mouth with no hands.

It had almost 900 retweets as of Monday evening, with many responding positively to his caption sarcatically saying that the picture showed Lauten “displaying the “class” that she said the Obama Daughters weren’t able to.”

5. Her Apology Came After ‘Prayer’ and ‘Talking to Her Parents’

Lauten later posted an apology for the original post, saying that she had prayed, spoken to her parents, and realized the impact of her words, saying she saw “more clearly just how hurtful my words were.”

Her apology was widely derided for coming too late and being “not enough“.

Loading more stories
wpDiscuz
0
0
Would love your thoughts, please comment.x
()
x
| Reply
Elizabeth Lauten is the former GOP staffer who has resigned after posting a harch criticism of the Obama daughters on Facebook.