A Scottish nurse has become the first person diagnosed with Ebola in the United Kingdom. Pauline Cafferkey, 39, contracted the disease while she was working in Sierra Leone during November and December 2014. She is now being treated in an isolation unit London.

1. Her Colleague Thinks She Got the Virus While Attending a Christmas Service in Sierra Leone

Pauline Cafferkey, the Save the Children nurse from Cambuslang, who is being treated for Ebola: pic.twitter.com/951HaxRo6j

The Daily Telegraph reports that Cafferkey may have contracted the virus when she removed her protective suit during a Christmas service in Sierra Leone. One her colleagues in Africa, fellow Briton Dr. Martin Deahl, told the Telegraph:

I would bet anything that she caught this while out in the community. I went to church myself on Christmas morning and I have no doubt Pauline probably contracted the virus doing something similar. We had a rule known as ABC which stood for Absolute no Body Contact but when you are in the community it is difficult to stick to the rules and easy to become complacent. It is also difficult when children come up to you and hug you.

Speaking to the Guardian, Dr. Deahl went on to severely criticize the lack of planning when Ebola volunteers arrived back in the United Kingdom:

The ridiculous thing about this is the advice says once we are home we shouldn’t use public transport or go into crowded places, or if we do it should just be for short journeys of less than an hour, and yet they were quite happy to let us go home disperse from UK airports on the underground, on flights to Glasgow, which just makes a complete mockery of the quarantine arrangements.

2. Cafferkey Became a Nurse After Seeing the Horror of the Famine in Ethiopia in the 1980s

Cafferkey being loaded on to a flight in Glasgow bound for London. (Getty)

The BBC reports that Cafferkey has been a nurse for 16 years. She was based out of the Blantyre Health Center in South Lanarkshire, close to Glasgow, Scotland’s largest city. The Scotsman reported that Cafferkey had been inspired to go into nurseing “after seeing images of the Ethiopian famine on the television in the 1980s.” She was part of a 30 person team sent by the National Health Service in the United Kingdom to help fight Ebola in Sierra Leone.

3. In Her Diary, She Wrote About People Dying Around Her in Sierra Leone

She had been writing a diary about her time in Africa. The journal was published by the Scotsman newspaper just days before Cafferkey was diagnosed with Ebola. She wrote about her arrival in Africa:

After nine days of training in the UK it feels good to eventually set foot in the Ebola Treatment Centre and begin work. The area where the Ebola patients are is classed as the infective Red Zone, and the area surrounding it, the safe Green Zone. Bizarrely we find ourselves saying “good luck” to our colleagues prior to entering the Red Zone, a sobering reminder of what we are doing.

In week two, Cafferkey was becoming accustomed to life in the Ebola-stricken part of the world:

The PPE [personal protective equipment] alien-type suit that I have to wear when going into the positive Red Zone is horrendous. It takes about 20 minutes to dress and 15 minutes to take the suit off at the other end. I feel sorry for the poor patients who have these alien-type people caring for them. Especially so for the young children, who are not only very sick but have these strange creatures with only their eyes visible trying to make them drink and take medications.

Later she wrote a touching piece about a boy she met who had been orphaned because of Ebola. The child’s sister had also died from the virus.

4. Before Leaving for Sierra Leone, She Was Trained by the Military

The BBC reported on Cafferkey’s trip in November 2014. It was reported that the 30-person volunteer group had been training at a Ministry of Defense facility in England. The head of the charity wing of the National Health Service, Professor Tony Redmond, told the BBC:

The actions of these selfless volunteers in going and the actions of their colleagues and managers to release them and cover for their duties is testimony if ever there was to the altruism that lies at the core of the NHS.

I am very proud of them all.

Cafferkey arrived back in the United Kingdom on December 28, traveling from Sierra Leone to Morocco and then on to London.

5. Nobody Has Contracted Ebola in Europe Since October

An animal rights protester in Spain after Teresa Romero Ramos’ dog was euthanized when Ramos was diagnosed with Ebola. (Getty)

She is the first person to contract Ebola in Europe since October when Spanish nurse Teresa Romero Ramos was diagnosed. Ramos was successfully treated for the virus and was released from hospital in Spain on November 5. She had gotten the virus from Spanish missionary Manuel Garcia Viejo in Sierra Leone, who died of the virus on September 25. 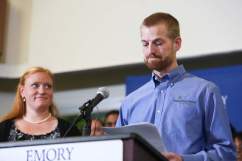