Amedy Coulibaly, the reported hostage taker of the kosher supermarket outside of Paris, has been killed by police. 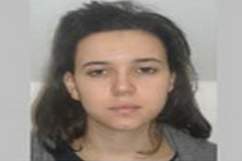 1. He Killed a Policewoman

A day before taking a kosher supermarket hostage on Friday afternoon, Coulibaly and Hayat Boumeddiene, reported by Fox News to be his girlfriend or wife, killed a policewoman named Clarissa Jean-Philippe in Montrouge, a commune in the southern Parisian suburbs.

Boumeddiene is said to have been the getaway driver.

After the murder, Coulibaly and Boumeddiene’s identities and whereabouts were unknown.

But when the kosher supermarket was taken hostage this afternoon, French police released this “wanted” flier.

Once the hostage crisis at the kosher supermarket began, it was realized that Boumeddiene was not involved with that portion of the terrorist attacks. She is still on the loose.

2. His Attack Was Coordinated With the Kouachi Brothers

The Kouachi brothers, Cherif and Said, were two of the trio responsible for the original terrorist attack against the journalist at Charlie Bebdo.

Coulibaly was reported by MSNBC to have been close friends with the Kouachi Brothers.

During his hostage stand-off, he demanded their safe release to his negotiator.

3. The Police Stormed the Supermarket

Around noon EST, French ambassador to the United States, Gerard Araud, tweeted “his information” about how the situation was unfolding with Coulibaly.

The kosher supermarket has been stormed. The terrorist is dead. The hostages are alive.

But it is now being reported by Shep Smith on Fox News that another hostage-taker may have been aiding Coulibaly. This hostage-taker is believed to have slipped out with hostages after Coulibaly was killed.

It’s also stated that not all hostages survived.

French media reported that five people were safely evacuated. Gerard Araud, the French ambassador to the U.S., tweeted that all hostages were safe but the Associated Press reported that a number were killed inside.

The number of hostages in the supermarket varies, with the Guardian reporting five, which MSNBC reporting six.

The same conflicting reports go with the number alleged to be killed, if nay.

With the report that a possible fifth terrorist has escaped into Paris following Coulibaly’s death, media sources speculate that more attacks may be on the way.

Loading more stories
wpDiscuz
0
0
Would love your thoughts, please comment.x
()
x
| Reply
Amedy Coulibaly, the reported hostage taker of the kosher supermarket outside of Paris, has been killed by police.