Aaron (left) and Austin (right) came out as gay to their dad and recorded the whole phone call on YouTube. The brothers say in the description of the video:

With 2015 now here, we think it is time to finally just be ourselves. We hope by our actions today you can finish watching this video feeling encouraged and inspired. Thank you for all the support. We love you.

At the time of writing the video has been viewed over 800,000 times.

1. Their Dad’s Response to the Video Is ‘I Love You Both’

In the video, the twins tell the camera that most people know they’re gay but “There’s one more person we have to tell..one more person we have to come out to.” That person is the boy’s dad. Understandably, the twins are incredibly nervous while the phone rings and they make small talk with their dad. When they finally tell him, their dad’s response is “I love you both, You’re living your lives. And that’s all you can do in life is live it.” Austin tweeted after the video went viral:

Thank you all so much for the love and support! Can't even begin to express how happy I am to have all of you behind us!

2. The Brothers Moved From Small Town Ohio to LA in July 2014

In an introductory video that the brothers uploaded in July 2014, they explained that they’re fraternal twins, meaning they’re not identical. In that video Aaron regards himself as “pretty chill” and Austin is more of a wild child. According to both of their Instagram accounts, the two are aspiring male models in Los Angeles. They moved to California during the summer of 2014 from a “very small town” in Ohio.

See ya later Ashland! LA, we're coming for you ??

Despite having relocated to Los Angeles, Austin Rhodes’ Facebook page says that he started at Georgetown University in 2014. He says lives in D.C., which is close to the Georgetown campus. He states that he’s from Newport Beach, California, when in reality he’s from Mansfield, Ohio, and went to Ashland High School. While living in Ohio, the brothers both worked at a Hollister store.

There has been an outpouring of emotion for the twins on Twitter, all of it supportive:

Shout out to my favorite twins. You’ve done something, I’m not yet ready to do myself. @AaronRhodes_ @AustinRhodes_ pic.twitter.com/rO1x1jW6dN

Prior to coming out to their father, the Rhodes brothers accompanied openly gay YouTube star DaveyWavyRaw to San Diego’s Pride parade in 2014. In the video, Wavey tells his viewers that he “kidnapped” the twins. 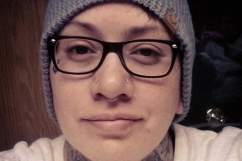 Read More
5 Fast Facts, Breaking News, LGBT
The YouTube sensation Rhodes Brothers came out to their dad, and then shared it with the world.