The Northeast has made it through more than a month of winter without being hit by severe weather. That’s about to change in a big way.

A front making its way across the country from the Midwest is expected to hit the East Coast hard in the coming days, dumping more than 2 feet of snow in some areas and battering the region with blizzard-like conditions on Monday and Tuesday.

The storm — dubbed Winter Storm Juno by the Weather Channel — will hit parts of the Midwest with several inches of snow on Sunday night before making its way east and wreaking havoc from Maine to Eastern Pennsylvania.

1. The Storm Is Expected to Bring More Than 2 Feet of Snow to Some Areas 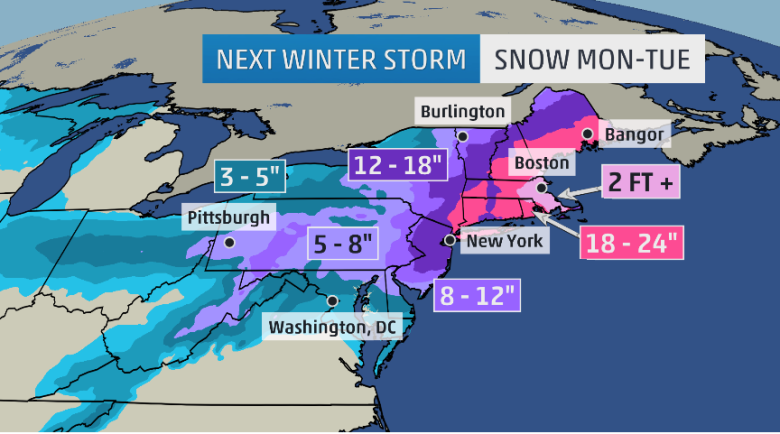 Parts of the Northeast are expected to have near-record snowfall totals, with a foot or more forecasted through most of New York and New England and more than 2 feet expected in Greater Boston and other parts of the New England coast.

Most of New England is expected to get more than a foot, as is New York City, which has experienced virtually no snow so far this season. 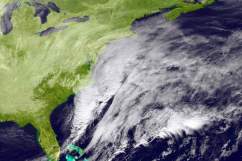 2. The Boston Area & Other Parts of Eastern New England Are Expected to Be Hit the Hardest

The storm is expected to make the biggest impact on Eastern New England, with an area from Maine stretching down through Greater Boston, Rhode Island and Cape Cod in danger of getting more than 2 feet of snow — coming close to record totals in some areas. Watch the regional forecast from Boston ABC affiliate WCVB in the video above.

The National Weather Service has a rundown of the biggest snow totals on record for Boston, Hartford, Providence and Worcester. Juno is expected to bring totals that could crack the top five in some of those areas.

3. Large Parts of the Northeast Are Under a Blizzard Watch or Blizzard Warning 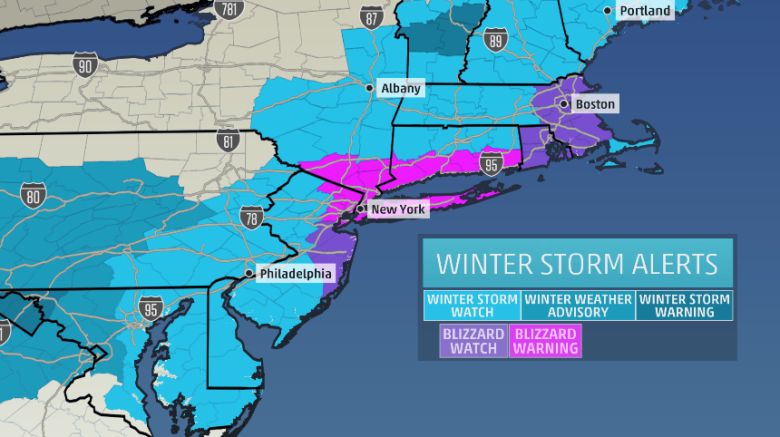 The National Weather Service issued a blizzard warning Sunday for an area stretching from northern New Jersey into southern Connecticut and including New York City and Long Island. The entire state of Rhode Island and most of Eastern Massachusetts are under a blizzard watch. Both advisories are in effect from Monday through Tuesday night.

The worst part of the storm is expected to hit Monday night into Tuesday, but snow and heavy winds are expected in the region throughout the day Tuesday and aren’t expected to go away until Wednesday morning.

The blizzard-like conditions are likely to bring the region to a crawl, making car travel next to impossible and potentially restricting air travel as well. 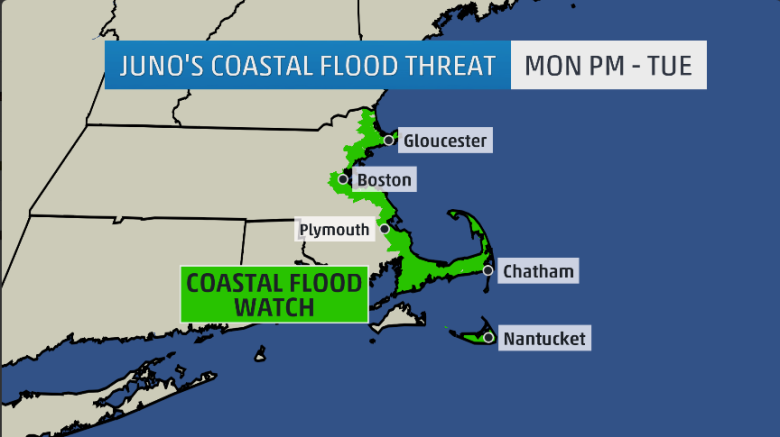 The storm is expected to cause widespread disruption throughout the Northeast — especially in coastal areas of Maine, Massachusetts, New Hampshire, Rhode Island, Connecticut and New York, where coastal flooding is likely and power outages are possible.

A coastal flood watch is already in effect for the coast of the Massachusetts mainland and for the island of Nantucket. 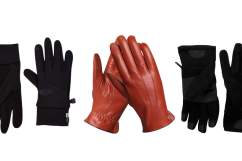 5. Areas As Far South as Washington D.C. Are Expected to Get Snow

While New York and New England are expected to be the hardest-hit areas, the storm is expected to bring significant snowfall throughout Greater Philadelphia and as far south as Washington, D.C. on Monday and Tuesday.

The Midwest isn’t expected to be hit nearly as hard as the Northeast, but parts of Illinois, Indiana and Ohio are expected to get up to 6 inches of snow on Sunday night into Monday as the storm makes its way east.

Loading more stories
wpDiscuz
3
0
Would love your thoughts, please comment.x
()
x
| Reply
The first major winter storm of the season is expected to dump more than two feet of snow throughout the Northeast, potentially crippling the region.