A terrifying video shot in the Ukrainian city of Mariupol in the Donetsk Oblast shows just how bad things have gotten as pro-Russian rebels continue to aggressively attack the region.

It begins with a Russian driver driving through the city around 11 AM local time on January 24, 2015. Dash cams in Russia and surrounding countries are common because of rampant insurance fraud.

But what this driver caught on camera wasn’t fraud, but terror.

The area is currently locked in a power struggle between sovereign Ukrainians trying to hold onto the Ukrainian region versus pro-Russian areas trying to annex it for Russia.

30 people died in this latest attack by pro-Russian rebels, according to BBC News.

The driver of the truck in this video can surely be accounted among them. 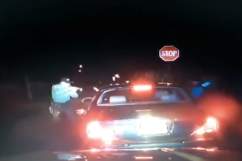 Loading more stories
wpDiscuz
0
0
Would love your thoughts, please comment.x
()
x
| Reply
On January 24, 2015, pro-Russian rebels shelled the city of Mariupol in Donetsk Oblast, Ukraine. Civilian drivers were killed, and one caught it all on video.