Tess Munster has made history as the largest plus-sized model signed to a mainstream agency.

Plus-size models are usually taller than 5 feet 8 inches and US-size 8 to 16. But Tess is both shorter and heavier than any other models on the books of London-based MiLK Model Management’s Curves plus-size division.

“I think we’re the only agency with a model of her size,” Anna Shillinglaw, the owner and director of MiLK Model Management, told the New York Daily News.

Now the 29-year-old, who lives in Los Angeles, wants everybody to know she is proud of her achievement…and she still has some big dreams to fulfill.

@TessMunster Just saw you on @InsideEdition You are so gorgeous and you are killin' it!! You are such an inspiration!! ???

Here’s what you need to know about the world’s biggest fashion model:

1. She Was Bullied at School

She quit school in Laurel, Mississippi at 17 after being bullied. She posted photos on Tumblr and people criticized her for doing it. But after nights sobbing alone in her room she vowed to stand up for her size and get noticed.

4. She Has a Son And Works Out at Least Four Times a Week

5. She Wants to be Known as Tess Holliday (She’s Engaged to Photographer Nick Holliday) 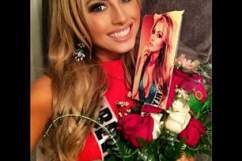 Loading more stories
wpDiscuz
2
0
Would love your thoughts, please comment.x
()
x
| Reply
Tess Munster has made history by becoming the biggest plus-size model to be signed by a mainstream model agency and the girl who was bullied growing up in Mississippi plans to show the world she's proud of her size