This was not the first attack on Charlie Hebdo. Back in 2011, the offices of the newspaper were firebombed. Charlie Hebdo created controversy when they showcased cartoons of Mohammad in the paper, including some nude images of the prophet. The image at the top of this post is from the cover of a November 2011 issue of French newspaper Liberation, which was published after the bombing of Charlie Hebdo‘s offices.

Charlie Hebdo will be published next week, despite the terrorist attack that occurred this week. According to the BBC, next week’s issue will be half the length of a normal issue, at a scant eight pages. While each weekly print run of the paper is usually 60,000 copies, the issue coming out next week will have a print run of one million copies. 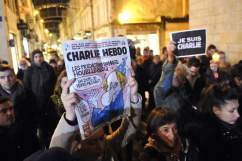 If all the controversy surrounding Charlie Hebdo has got you curious about this satirical publication, there are ways you can get caught up on the history of this iconic weekly. If you want to subscribe to Charlie Hebdo and see how the next few months play out for this controversial newspaper, you can easily subscribe on Amazon. A year-long subscription of 52 issues will set you back $186.25, or about $3.58 an issue. You can get more information on subscribing to Charlie Hebdo here. Depending on where you live, you may also be able to find this publication at your local bookstore or magazine stand.

If you’re interested in single back issues, you can check out listings on eBay, as well as individual third party sellers on Amazon.

There have also been several collected editions of this French publication over the years. You might get lucky at your local used bookstore or foreign language bookshop, but your best bet is probably to shop online. With all the recent controversy surrounding Charlie Hebdo, many sellers have cranked up the prices of these collections, so you may have to pay a pretty penny to own them. We’ve seen one Amazon seller offering the Charlie Hebdo “Les 1000 Unes” collection pictured above for $1,874.19.

Loading more stories
wpDiscuz
0
0
Would love your thoughts, please comment.x
()
x
| Reply
The terrorist attack on Charlie Hebdo has generated a great deal of interest in this controversial publication.