President Obama was asked about his “first wife” in a cringe-making interview with YouTube celebrity GloZell Green.

The PR stunt – granting interviews to three of the most popular YouTube content producers – backfired when Green, age 52, insisted on giving the president three samples of her trademark green lipstick as presents for his two daughters and his “first wife.”

Momentarily taken aback, the president cracked: “You know something I don’t?”

Green, known for her YouTube stunts like bathing in a bathtub filled with milk and Fruit Loops breakfast cereal, hadn’t finished there.

She told Obama – who just announced a thaw in US relations with Cuba in Tuesday’s State of the Union speech – that Cuban strongman Raul Castro “puts the ‘dic’ in ‘dictator.”

She also quizzed the president about her fears the “po po” will shoot her family, here:

The comic – real name GloZell Lynette Simon – may be green, but she knew how to put the most powerful man in the free world on the spot! 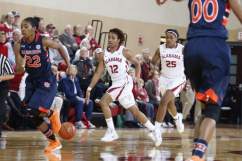 Read More
Interview, President Barack Obama, Youtube
President Obama was embarrassed by a question about his "first wife" in a White House publicity stunt that backfired with awkward questions from the YouTube star.