Nemtsov lying dead on the streets of Moscow. (Getty)

An outspoken Vladimir Putin critic has been silenced forever after he was shot dead in Moscow. Boris Nemtsov was killed on February 27, just a two days before he was due to lead an anti-crisis march in the Russian capital called Vansa, the Russian word for “spring.” The Sochi native was 55 years old.

UPDATE: Here's the place where #Nemtsov was shot dead. There must be a lot of security cameras in the area pic.twitter.com/BZNZuKSNB6

Russian reporter Yury Barmin tweeted that Nemtsov was shot four times in the chest close to the Kremlin. Barmin said that the shots came from a car.

2. Russian Cops Are Calling the Operation to Find the Killers ‘Interception’

Russia Today reports that Nemtsov’s death was confirmed by one of his colleagues, IIya Yashin. Later, the Russian interior ministry also confirmed that Nemtsov had been killed. According to police in Russia, the operation to catch the killers is known as “Interception.”

3. He Was Boris Yeltsin’s Chosen Successor

Nemtsov at the beginnings of his political career in 1991. (Getty)

Nemtsov was Russia’s first deputy prime minister following the collapse of the Soviet Union in the early 90s. He was considered a disciple of then Russian President Boris Yeltsin.

On his Twitter page, Nemtsov describes himself as the leader of the Solidarity movement and the Party of People’s Freedom.

4. He Compared Putin to Stalin

At one point, Nemtsov and Putin, who replaced Yelstin, became enemies. Even during Nemtsov’s time as governor of Nizhny Novgorod, one of the largest cities in Russia, he was a vocal critic of the administration, not something that’s easy to do. In a blog posting about his protest, Nemtsov wrote that he and his followers were marching against “Putin’s aggression.” In 2013, in a speech in Washington D.C. about Putin, Nemtsov said:

Stalin was a murderer, but he was not corrupt. Putin and his circle are deeply corrupt, and they care about their assets in Europe. And this is a chance for European democracies, because even though Putin might act as if he has unlimited power and unlimited opportunities, that is not true. He only wishes he had that.

For comparing Putin to Stalin, Nemtsov was heavily criticized in a Forbes profile.

5. It Was Rumored That He Was Passed Over Because He Was Jewish

Nemtsov being arrested after a protest in 2007. (Getty)

He is survived by his wife and four children. Nemtsov’s wife was named Raisa Akhmetovna, she is part Tatar. Jewish advocacy website AJC named Nemtsov as one of the most prominent Jews in Russia thanks to his mother’s heritage. An article on their site says that in his 1997 memoir, The Provincial Man, which was a mere 150 pages, Nemstov reveals that he was baptized Russian Orthodox in secret. It was rumored around the time of Boris Yeltsin’s abdication that Nemtsov was passed over because of his judaism. Though he himself had always said that religion played an “insignificant role” in his life. 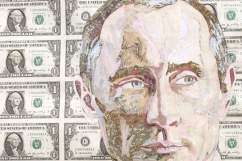 Vladimir Putin Net Worth: 5 Fast Facts You Need to Know