A 17-year-old kid is filing a complaint after he was beaten to a pulp by two undercover cops in Louisiana. The attack happened on February 13 at a mall in Metairie, Louisiana. The victim has been named as Brady Becker. The beating he received was captured on video and has gone viral on YouTube.

1. Becker Says He Was Defending His Friend

The video begins with Becker pinned down by a man. Just seconds in, is escalates fast as the man unleashes a series of punches at the kid he’s sitting on. According to Becker, he was just defending his friend, Jacob Jensen, 16, who had been approached by two men who didn’t identify themselves as sheriff’s deputies until after the incident was over. You can watch the video above.

2. After Suffering a Broken Jaw, Becker Was Charged With Resisting Arrest

Becker’s lifeless body just prior to being pulled from the ground and taken into custody.

After being treated at a local hospital for a broken jaw and other facial injuries, Becker was booked on charges of resisting arrest, battery on an officer, inciting a riot and possession of alcohol by a minor. He was booked at Jefferson Parish Correctional Facility. One reviewer on Yelp wrote about the jail, “This is the Jefferson Parish Correctional Center. You don’t want to go here. It is a jail. It is newer and nicer looking inside compared to OPP, but it is still jail. Don’t screw up and you wont end up here.”

3. The FBI Are Investigating

Speaking to WDSU, Col. John Fortunato of the Jefferson Parish Sheriff’s Office said that Becker must make the complaint personally. In a statement the FBI said that the Civil Rights division of the organization is looking into Becker’s case. Fortunato went on to tell the station that the officers were working a parade route during the town’s Mardi Gras celebrations. He added that when the officers involved make a full report, the matter will be internally investigated.

4. He’s a Star Receiver for His High School Football Team

Becker plays as a receiver for St. Charles Catholic in Louisiana. The Times-Picayune reports that he was one of the team’s “leading receivers as a junior” in 2014. Notably, he scored a game winning touchdown in the team’s 9-3 win over local rivals, De La Salle, you can watch the play above. The team made it to the Division II semi-finals.

5. His Mother Is Helping to Lead the Campaign for Justice

In a Facebook statement about the arrest on February 15, Brady Becker’s mother, Donnell Becker, said:

I can’t say too much but the amount of friends and people I don’t even know who have supported my son and the teens involved is overwhelming. Thank you for all the support, prayers and comments. The fight for justice is going to be a long tough road, but I won’t stop until justice is served for these kids. They deserve it.

Five days later, as the campaign for justice for Brady grew, Donnell Becker wrote on Facebook, “There is a cry for justice to be served for Brady and all teens involved. Excessive force and brutality is not necessary to handle the incident. I am overwhelmed and grateful to all of you for your positive comments, prayers, and continued support. Thank you.” 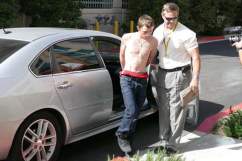 Read More
5 Fast Facts, Breaking News, Crime, Police
Follow News ↓
Brady Becker is the St. Charles football player in Louisiana who was shown in a YouTube being beaten by an undercover cop in the Jefferson Parish.