A shooting in Copenhagen at a seminar on blasphemy, featuring an artist known for controversial pictures of the prophet Muhammad has left one dead. Here’s what you need to know about the Copenhagen shooting today:

1. This Attack May Have Been Inspired By the Shooting at Charlie Hebdo

Authorities have shot and killed the many they believe responsible for a pair of shootings in Copenhagen, 10 hours apart. The first took place at a cafe hosting a conference on free speech, religion and blasphemy, the second at a synagogue a few miles away.

Police believe the two attacks were inspired by the January terror attack in France on the Charlie Hebdo headquarters. In January, attackers burst into the office full of cartoonists and, while the pursuit was ongoing, a separate group of terrorists took several people in a a kosher supermarket hostage.

According to Danish intelligence officer Jens Madsen, speaking to the Associated Press, the gunman may have been inspired by radical Islamic literature:

Swedish cartoonist Lars Vilks was present at the conference and may have been the intended target, as the Daily Mail reported. Vilks is known for caricatures in 2007 in which he depicted the prophet Muhammad dressed as a dog.

As Francois Zimeray, the French ambassador to Denmark, who was attending the conference at the cafe at the time of the shooting, told news agency AFP:

“They tried to repeat Charlie Hebdo but couldn’t get in.”

Helle Merete Brix, an organizer of the event, told the Associated Press that Vilks was the target:

“I clearly consider this as an attack on Lars Vilks.”

Policemen secure the area around a building in Copenhagen, Denmark, where shots were fired on February 14, 2015 outside the venue of a debate held on art, blasphemy and free speech. (Getty)

According to police, the gunman used copious amounts of ammunition, as many as 200 bullets, during the cafe attack.

The sole victim was a 40-year-old Danish man, according to police.

According to Ambassador Zimeray:

3. The Conference Was a Debate on ‘Blasphemy’

Policemen secure the area around a building in Copenhagen, Denmark, where shots were fired on February 14, 2015 outside the venue of a debate held on art, blasphemy and free speech. (Getty)

The conference was on free speech, blasphemy and art. Among those present was political activist and speaker Inna Shevchenko who was in the middle of delivering a speech when the shooting began.

“I was at the point of my speech when i was saying that often it is an illusion that we have freedom of speech in Europe.then we heard shots.”

Vilks, who was not harmed in the shooting, has faced several death threats since 2007, and security at the event was tight, according to reports.

4. The Suspect Was Shot and Killed

Danish police have shot and killed the man they believe responsible for the shootings. Intelligence officer Madsen said the suspect has been on the agency’s “radar” but did not reveal the identity.

Following the second shooting, police believed the suspect may have escaped in a taxi — they followed up at the address at which the taxi dropped off the suspect at which point he opened fire.

The suspect was reportedly killed during the exchange of gunfire.

5. Al-Qaeda in Yemen Claimed Responsibility for the Attack on Charlie Hebdo

After that pair of attacks, which left 17 dead including several cartoonists, Al-Qaeda in Yemen claimed responsibility.

As Nasr al-Ansi, an al-Qaeda commander, said in a video claiming responsibility for the attack:

“Today, the mujahideen avenge their revered prophet, and send the clearest message to everyone who would dare to attack Islamic sanctities.”

No group has yet claimed responsibility for the Copenhagen shootings. 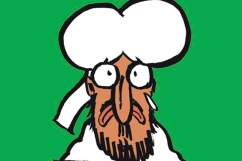 Loading more stories
wpDiscuz
0
0
Would love your thoughts, please comment.x
()
x
| Reply
A shooting in Copenhagen at a seminar on blasphemy, featuring an artist known for controversial pictures of the prophet Muhammad has left one dead.