Daniel Rosen is the U.S. State Department official who has been arrested in D.C. and charged with attempting to solicit sex from a minor.

1. The Child Exploitation Unit Had Been Tapping Rosen’s Phone

Rosen was arrested at his home here along Adams Mill road in D.C. (Google Street View)

A Fox News report that broke the story of Rosen’s arrest says the 45-year-old official was taken into custody at his home in D.C. on the afternoon of February 24. The report states that a detective in the Fairfax County Child Exploitation Unit had been posing as a child in online messages with Rosen. A source told Fox that the unit had been “hitting [Rosen’s] phones.” This means a search warrant had been issued in the case.

2. Rosen Could Get 30 Years in the Slammer

Rosen is charged with Use of a Communications Device to Solicit a Juvenile. According to Virginia state law, if found guilty, Rosen could face up to 30 years in prison. NBC Washington reports that Rosen will be extradited to Virginia.

3. He’s a Director of Counterterrorism at the State Department

According to his LinkedIn page, Rosen is the Director of Counterterrorism Programs and Policy at the U.S. Department of State. He’s been in that job since August 2008. Previously he worked at the Near East Asia Center for Strategic Studies. He was educated at the Fletcher School of Law and Diplomacy at Tufts University. In a brief statement following his arrest, a State Department official said, “His security clearance will be suspended and he will be put on administrative leave while this proceeds to its end through any judicial process. We are following standard procedure in this case.” The statement didn’t name Rosen as the suspect in the case.

4. He Said in 2012 That He Didn’t Think Terrorist Recruitment Was Going on at the International Level

The flag of ISIS. The terrorist group has been widely successful in recruiting members from all corners of the globe. (Wikipedia)

In 2012, Rosen spoke at an event for the Potomac Institute for Policy studies in D.C. He spoke about the risk of terrorism in the U.S. despite “counterterrorism successes.” He said his department was studying the recruitment of terrorists and that recruitment was going on in “the street and the neighborhood. Not the provincial level, not the national level certainly — really not the international level.” Those comments now stand in stark contrast to the reality of ISIS’ successes in drawing recruits from around the world — including America.

Rosen also stated at the event that al-Qaida was at its apex in 2006 and 2007. You can watch Rosen speaking in the video above. He starts talking around 20 minutes in.

5. This Is the Second Child Sex Scandal to Hit D.C. in 12 Months

This case brings back memories of former chief of staff to Republican Senator Lamar Alexander, Jesse Ryan Loskarn, who was accused of possessing child pornography. He committed suicide at his family home before going to trial on the charges. Since being arrested, Loskarn had been in the custody of of his parents, Charles and Laura Goskarn, and forced to remain at their home in Sykesville, Maryland, where he’s originally from. He was required to wear an ankle bracelet while a grand jury investigation was ongoing. During this time, he was not allowed to use the Internet.

The Tennessean reports that he was found in the family’s basement, unresponsive. The Associated Press reports that he hanged himself. In the Politico report, it states that prosecutors believed that Loskarn was a suicide risk. This claim was rebutted by Loskarn’s attorney, Pamela Satterfield, who said suicide was not a risk. 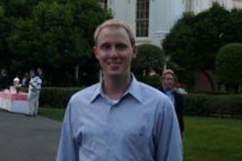 Loading more stories
wpDiscuz
0
0
Would love your thoughts, please comment.x
()
x
| Reply
A senior State Department official has been arrested in D.C., charged with trying to solicit sex from a minor.