Legendary New York Times columnist David Carr has died at the age of 58. Fittingly, the Times mainstay died in the offices of the newspaper in the Hell’s Kitchen neighborhood in Manhattan.

1. Carr Collapsed Inside the Times’ Offices

His cause of death was not revealed in his obituary in the New York Times. He collapsed inside his office at some time in the afternoon on February 12, reports the New York Daily News. On the day of his death he spoke to journalism students at the New School. The day before his death, Carr had appeared on CBS’ This Morning to speak about the suspension of Brian Williams and Jon Stewart’s retirement.

2. He’ll Forever Be Remembered for Taking Down Shane Smith

His articles, written under a column entitled, “The Media Equation,” about the media business were famously cutting edge. In the Times’ documentary Page One, Carr famously cut uber-cool Vice founder Shane Smith down when Smith attempted to criticize the Times. You can watch the clip above.

Carr battled addiction throughout his life, culminating in an arrest for cocaine possession in his native Minnesota while he worked for the Twin Cities Reader. He joined the Times in 2002 as a business reporter. Prior to working at the Times, Carr wrote for The Atlantic and New York magazine. Before moving to New York, Carr was the editor of the Washington City Paper in D.C.

Carr was one of the first reporters to use Twitter. He wrote about his first experiences with the social media site in a 2010 column. Carr said he was introduced to the site at SXSW in 2009. Prior to discovering Twitter, Carr described himself as “oversubscribed on Facebook.” In July 2014, he wrote in the Times about reporters’ instincts to use Twitter for stories without verifying the information first.

5. Carr Is Survived by His Wife & 3 Daughters

He’s survived by his wife Jill Rooney Carr and his daughter Maddie. Carr had two daughters from previous relationships, Erin and Megan. He lived in Montclair, New Jersey. His family life was detailed on a New Jersey Monthly feature from July 2008 called “One Tough Nut.” 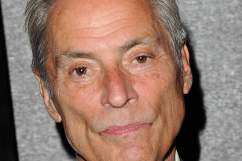