A former German rapper that went by “Deso Dogg” has been added to a U.S. terror blacklist due to reported ties to ISIS. He now goes by the name Abu Talha al-Almani, which translates to “Abu Talha the German.”

Cuspert is 39 years old and was born to a German mother and Ghanaian father. Ghana has a checkered colonial history with Germany and is on Africa’s West Coast.

Read on for what you need to know.

1. He Was Named by the U.S. State Department

A media note released by the U.S. State Department on February 9, 2015 reads:

The Department of State has designated German citizen Denis Cuspert as a Specially Designated Global Terrorist under Executive Order (E.O.) 13224, which targets terrorists and those providing support to terrorists or acts of terrorism. As a result of the designation, all property subject to U.S. jurisdiction in which Cuspert has any interest is blocked and U.S. persons are prohibited from engaging in transactions with him or to his benefit.

Denis Cuspert is a foreign terrorist fighter and operative for ISIL, a designated foreign terrorist organization. Cuspert joined ISIL in 2012 and has appeared in numerous videos on its behalf, the most recent dating from early November, in which he appears holding a severed head he claims belongs to a man executed for opposing ISIL. Born in Berlin, the 39-year-old Cuspert spent time in jail for various offenses. Now calling himself Abu Talha al-Almani, Cuspert has pledged an oath of loyalty to ISIL leader Abu Bakr al-Baghdadi and appears to serve as an ISIL recruiter with special emphasis on recruiting German speakers to ISIL. Cuspert is emblematic of the type of foreign recruit ISIL seeks for its ranks – individuals who have engaged in criminal activity in their home countries who then travel to Iraq and Syria to commit far worse crimes against the people of those countries. Foreign terrorist fighters are reported to have played significant roles in some of ISIL’s most egregious crimes, including the massacres of the Sh’aitat tribe in Syria and the Albu Nimr tribe in Iraq, as well as the almost daily public executions in Raqqa. Cuspert has been a willing pitchman for ISIL atrocities. Cuspert is also wanted by the German government on suspicion of involvement in terrorist activities in his home country.

2. He Was Previously Known by the German Intelligence

NBC reports that in September 2014 that German Intelligence compiled a 25-page report on Cuspert’s radicalization. It is believed that he was radicalized in 2010 in Berlin’s Salafist scene and that he quickly became popular as a teacher of radicalization and a recruiter for the terrorist organization that would become ISIS.

The announcement of the U.S.’s targeting of Cuspert follows a February 9 press meeting between President Obama and German Chancellor Angela Merkel at the White House, where they reiterated their unity in defeating Islamism and ISIS.

3. He Was Formerly a Rapper

Prior to his radicalization, Cuspert was a well-known rapper with numerous YouTube music videos. He had three albums and even toured with DMX.

Above is a music video for his song Wilkommen In Meiner Welt, which translates to “Welcome to My World.” The rap lyrics are extremely violent and the hook translates to:

4. He Appeared in an ISIS Video Holding a Severed Head

After moving to a Salafist colony in Egypt, Cuspert made his way to ISIS-held territory in Syria. ISIS then released the above video of Cuspert and his arrival into terrorist lands in 2013.

It was then thought that Cuspert may have been killed, but it appears not to be the case as two new videos have emerged of him. One shows him holding a severed head, the other shows him swearing allegiance to ISIS head Abu Bakr al-Baghdadi.

It is now thought that Cuspert is a part of the ISIS inner-circle.

5. He Was Already on the United Nations’ Terrorist Blacklist

Cuspert was already on the United Nations’ terrorist blacklist. Because of this, his assets have been frozen and there is a travel ban and an arms embargo against him. The U.S. blacklist overlaps many of those measures by the UN, but also prohibits American citizens from doing any business with him. 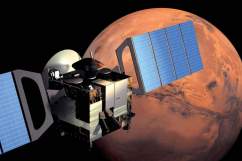 WATCH: Meet the First Volunteers to Die on Mars

Loading more stories
wpDiscuz
1
0
Would love your thoughts, please comment.x
()
x
| Reply
A former German rapper named "Deso Dogg" has been added to a U.S. terror blacklist due to reported ties to ISIS. He now goes by the name Abu Talha al-Almani.