Boaters are rushing to get out of the water and residents are being urged to stay away from Japan’s northeastern coast after an earthquake in the Pacific Ocean prompted a tsunami advisory for the region on Tuesday morning.

This picture taken by a Miyako City official on March 11, 2011 and released on March 18, 2011 shows a tsunami breaching an embankment and flowing into the city of Miyako in Iwate prefecture shortly after a 9.0 magnitude earthquake hit the region of northern Japan. (JIJI PRESS/AFP/Getty Images)

A 6.9-magnitude earthquake struck in the Pacific Ocean off the Japanese coast near Honshu Island at about 8 a.m. local time Tuesday morning. The Japan Meteorological Survey has placed the area, known as the Iwate Prefecture, under a tsunami advisory with a warning that the waves may reach up to 3-feet in height.

The quake was recorded at a depth of about 6-miles and according to the Associated Press, could be felt 430 miles away in Tokyo.


2. There is a Difference Between Tsunami Warning and Tsunami Advisory

The chart above, provided by the National Weather Service, provides the differentiation of the two: a tsunami warning is a “inundating wave possible” with a full evacuation suggested, while a tsunami advisory is “strong currents likely” with suggestions to stay away from shores.

The map below is from the Japanese Meteorological Agency and was updated at 9:52 a.m. local time. Notice there are two different colors for tsunami advisory and tsunami warning.

This picture taken on March 11, 2011 by Sadatsugu Tomizawa and released via Jiji Press on March 21, 2011 shows tsunami waves hitting the coast of Minamisoma in Fukushima prefecture. (SADATSUGU TOMIZAWA/AFP/Getty Images)

The same area was devastated by an earthquake and tsunami in March of 2011.

The Tōhoku earthquake and tsunami left at least 22,000 dead or missing.

4. Residents Have Been Evacuated

Officials have evacuated residents along the coast and urged people to stay away from the shore.

Japanese broadcaster NHK warned residents a one metre-high (three feet) wave was expected to hit the coast of Iwate prefecture in northern Japan at approximately 2330 GMT. It reported that evacuations had been ordered for towns closest to the coast in Iwate.

The quake was measured at a depth of about 10 km (6 miles). The Pacific Tsunami Warning Center in Hawaii said there was no danger of a Pacific-wide tsunami.

5. The Area has a Nuclear Power Plant

Though the area to be affected by the earthquake/tsunami is largely rural, it does have a nuclear power plant.

However, CNBC reports the plant was not damaged by the earthquake and is expected to be fine if a tsunami does occur. 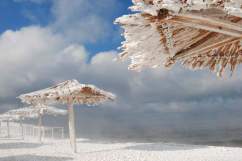 Hawaii Blizzard: All the Photos You Need to See

Loading more stories
wpDiscuz
1
0
Would love your thoughts, please comment.x
()
x
| Reply
Part of the Japanese coast is under a tsunami advisory after a 6.9 magnitude earthquake struck off the the coast, prompting the evacuation of 10,000 people.