ISIS is claiming that U.S. female aid worker Kayla Jean Mueller is dead following a Jordanian air strike in Syria. She was 26 years old. The claim is being investigated by the CIA. According to ISIS, she was killed on February 6 during prayers at noon. The group said Jordanian planes had been bombarding the area for over an hour. On February 10, her family released a statement that confirmed Kayla Mueller had been killed. The statement read:

We are heartbroken to share that we’ve received confirmation that Kayla Jean Mueller, has lost her life. Kayla was a compassionate and devoted humanitarian. She dedicated the whole of her young life to helping those in need of freedom, justice, and peace.

The statement offered no information as to the circumstances of Mueller’s death.

1. She Had Been Living With Her Syrian Boyfriend Near Aleppo

This is Kayla Jean Mueller, the American female being held hostage by ISIS pic.twitter.com/MOXLjNx8aa

It had long been known that ISIS had a female U.S. aid worker in captivity. CBS News reported in August 2014 that ISIS had demanded a ransom of $6.6 million for her. She was being held in Syria. Mueller was captured there on August 4, 2013 with a group of other aid workers. Those other captives have since been released. The Washington Post reports that she had been working with Spanish Doctors Without Borders in Aleppo when she was taken. She had been in that area since late-2012. Mueller had been with her boyfriend who is Syrian. A few months after her captivity, her colleagues received an email proof-of-life showing her in a hijab, begging for her life, reports the New York Times. In the days after her death, the White House confirmed that there is at least one other American being held by ISIS.

ISIS has a track-record of lying about hostage deaths. On February 6, a video showing the execution of a Jordanian pilot was released. The video was dated from early January. Despite this, the group had been negotiating for his release in exchange for a failed suicide bomber, Sajida al-Rishawi. The day after Kasasbeh’s execution video was uploaded, al-Rishawi was hanged by the Jordanian government. Jordan’s Interior Minister Hussein Majali said “[ISIS] tried to cause problems internally in Jordan and haven’t succeeded. They are now trying to drive a wedge between the coalition with this latest low PR stunt.” In a statement, Mueller’s parents, Carl and Marsha Mueller said:

Kayla found this (aid) work heart-breaking but compelling; she is extremely devoted to the people of Syria.

When asked what kept her going in her mission, she said, ‘I find God in the suffering eyes reflected in mine, if this is how you are revealed to me, this is how I will forever seek you.

Her family had been asked by U.S. officials to keep Mueller’s captivity secret. Upon the confirmation of her death President Obama said, “No matter how long it takes, the United States will find and bring to justice the terrorists who are responsible for Kayla’s captivity and death.” The president referred to ISIS as a “hateful and abhorrent terrorist group.” A letter from Kayla was made public by her family in the aftermath of her death:

Everyone, If you are receiving this letter it means I am still detained but my cell mates (starting from 11/2/2014) have been released. I have asked them to contact you + send you this letter. It’s hard to know what to say. Please know that I am in a safe location, completely unharmed + healthy (put on weight in fact); I have been treated w/ the utmost respect + kindness.

I wanted to write you all a well thought out letter (but I didn’t know if my cell mates would be leaving in the coming days or the coming months restricting my time but primarily) I could only but write the letter a paragraph at a time, just the thought of you all sends me into a fit of tears.

If you could say I have “suffered” at all throughout this whole experience it is only in knowing how much suffering I have put you all through; I will never ask you to forgive me as I do not deserve forgiveness.

I remember mom always telling me that all in all in the end the only one you really have is God. I have come to a place in experience where, in every sense of the word, I have surrendered myself to our creator b/c literally there was no else…. + by God + by your prayers I have felt tenderly cradled in freefall.

I have been shown in darkness, light + have learned that even in prison, one can be free. I am grateful. I have come to see that there is good in every situation, sometimes we just have to look for it. I pray each each day that if nothing else, you have felt a certain closeness + surrender to God as well + have formed a bond of love + support amongst one another…

I miss you all as if it has been a decade of forced separation. I have had many a long hour to think, to think of all the things I will do w/ Lex, our first family camping trip, the first meeting @ the airport. I have had many hours to think how only in your absence have I finally @ 25 years old come to realize your place in my life. The gift that is each one of you + the person I could + could not be if you were not a part of my life, my family, my support.

I DO NOT want the negotiations for my release to be your duty, if there is any other option take it, even if it takes more time. This should never have become your burden. I have asked these women to support you; please seek their advice. If you have not done so already, [REDACTED] can contact [REDACTED] who may have a certain level of experience with these people.

None of us could have known it would be this long but know I am also fighting from my side in the ways I am able + I have a lot of fight left inside of me. I am not breaking down + I will not give in no matter how long it takes. I wrote a song some months ago that says, “The part of me that pains the most also gets me out of bed, w/out your hope there would be nothing left…” aka-­-The thought of your pain is the source of my own, simultaneously the hope of our reunion is the source of my strength.

Please be patient, give your pain to God. I know you would want me to remain strong. That is exactly what I am doing. Do not fear for me, continue to pray as will I + by God’s will we will be together soon.

All my everything, Kayla 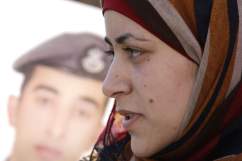 2. She Dedicated Her Life to Helping Others Since Age 15

She’s a native of Prescott, Arizona. The Daily Courier in Prescott reported on her enrolling at Northern Arizona University in Flagstaff in 2007. The town of Prescott is 100 miles north of Phoenix.

This is ISIS’ statement claiming Mueller was killed in a Jordanian airstrike, according to jihadism researcher Charlie Winter. (Twitter/@charliewinter)

The full statement from ISIS, as translated by SITE Intel:

The criminal Crusader coalition aircraft bombarded a site outside the city of ar-Raqqah today at noon while the people were performing the Friday prayer. The air assaults were continuous on the same location for more than an hour.

Allah made their pursuit disappointed and deterred their cunning, and no mujahid was injured in the bombardment, and all praise is due to Allah.

It was confirmed to us the killing of an American female hostage by fire of the shells dropped on the site, and she is Kayla Jean Mueller.

It stated that she was interested in the Darfur crisis. She told the paper at the time “I love cultures and language and learning about people’s cultures.” For most of her high school years she was a member of the Save Darfur Coalition, which lobbied members of Congress. The Courier article noted that she wanted to continue her volunteer work. The Washington Post reports that when she graduated from college in 2009, she worked in India, teaching at an orphanage. In 2011, she returned home to Arizona where she worked at an HIV/AIDS clinic. Later in 2011, she went to France to learn French in the hope of working in Africa. She later decided against that plan and went to help in the Middle East.

3. She Once Helped Reunite a Syrian Family Separated by the Civil War

The Daily Courier reports that she worked for the group Support to Life and the Danish Refugee Council in Turkey. The group offers support and relief to refugees from the Syrian Civil War. You can watch a video of Mueller talking about her solidarity with the Syrian people above. Speaking to the Kiwanis Club in Prescott, Arizona, where her father Carl is a member, in May 2013 during a brief visit home from Syria, she talked about how she reunited a Syrian family. She told the group about how a man came to her as he was looking for his 6-year-old boy and wife, the wife had been killed but the man was able to find his son. She said during her speech in May 2013 that, “When Syrians hear I’m an American, they ask, ‘Where is the world?’ All I can do is cry with them, because I don’t know.”

4. Jordan Has Been Raining Bombs on ISIS Since the Brutal Execution of Its Pilot

Jordan stepped up operations against ISIS in the wake of the burning execution of Jordanian pilot Muath al-Kasasbeh. Al Arabiya reported on February 5 that the U.S. had moved an aircraft rescue plane to northern Iraq. Muath al-Kasasbeh was captured by ISIS when he was forced to eject during a bombing mission.

Thousands of Jordanians participate in a mass demonstration after Friday prayers near Al Hussein Mosque to express their solidarity with the pilot murdered by ISIS. (Getty)

The Associated Press reports that no Islamic State militants are thought to have been killed in the strikes that allegedly killed Mueller.

5. She Is the Fourth American to Die in ISIS Captivity Since August 2014

The flag of ISIS.

The reports about Mueller’s death first appeared on the website of Site Intel, a terrorist watchdog. The group had previously broken the news of the deaths of Americans James Foley, Steven Sotloff and Peter Kassig.