Kelly Renee Gissendaner won a stay of execution on Wednesday because of a winter storm sweeping through Georgia.

But the 47-year-old doesn’t have much time to celebrate – she is now scheduled to die by lethal injection on Monday.

The mother-of-three was convicted of a February 1997 murder plot targeting her husband in suburban Atlanta.

Gissendaner has exhausted all her state and federal appeals. She is the only woman on Georgia’s Death Row.

Here’s what you need to know about the rare death penalty prisoner who did NOT commit murder::

1. She Will be The First Woman to be Executed in Georgia For 70 Years

The last woman to be put to death in Georgia was Lena Baker, an African-American who was convicted of murder by an all-white, all-male jury in 1944 – and pardoned 60 years later.

She argued that she shot an attacker in self-defense after he held her captive, threatened to kill her and was about to hit her with a metal bar. Georgia’s parole board posthumously pardoned her after finding that “it was a grievous error to deny (her) clemency.”

2. Her Last Meal Request is Huge

For her last meal, Gissendaner super-sized it. She requested two Burger King Whoppers with cheese (with everything), two large orders of fries, popcorn, cornbread, a side of buttermilk and a salad with tomatoes, bell peppers, onions, carrots, cheese, boiled eggs and Paul Newman buttermilk dressing.

She also requested a glass of lemonade and cherry-vanilla ice cream for dessert. The prison does have a budget for the meal so she may not get it all.

Gissendaner has languished on Death Row for 17 years.

3. She Persuaded Her Boyfriend to Kill Her Husband

Gissendaner’s husband, Douglas, was bludgeoned and stabbed to death in remote woodland by his wife’s lover, Gregory Owen, in February 1997.

The cheating wife persuaded Owen to carry out the grisly killing to prove his love for her and clear the way for them to get married.

Police quickly discovered Owen’s connection to the widow and they were both arrested the day after the funeral.

But while the mother-of-three was sentenced to death, Owen – the man who actually carried out the killing – escaped with a life sentence that could see him out of prison less than ten years from now.

After accepting a controversial plea deal to testify against his ex-lover, Owen admitted his guilt and helped prosecutors portray Gissendaner as the mastermind – insisting the murder was idea and that she planned it and convinced him to do it. He was “the bullet”, the lead prosecutor claimed during the trial, but she was “the gun.”

Women on Death Row are rare and executions even rarer. Gissendaner’s plight is also rare; of the 1,402 murderers executed since the Seventies, only five were conspirators rather than the actual killers.

As the only woman on Death Row, she lived in total segregation from other inmates at a woman’s prison just outside Atlanta.

On Monday, she will be moved from her women’s prison to a men’s facility, the Georgia Diagnostic And Classification State Prison, 114 miles away, where she is to be put to death in its small execution block.

5. She Once Worked as a Prison Guard

Her marriage to Douglas Gissendaner was rocky from the start.

Between 1989 and 1996 they married, divorced, remarried, separated and reunited. Her three children, now grown up, were fathered by different men — one by Douglas.

Gissendaner was in the U.S. Army for a while and even worked as a prison officer.

They moved to Auburn, Georgia, in December 1996. But Douglas didn’t know that his wife had found a boyfriend — Gregory Owen — while they had been separated. She continued the affair and told Owen her husband would have to be killed because he would never leave them alone to be happy.

There was also the matter of a sizable life insurance policy. 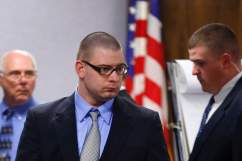 Loading more stories
wpDiscuz
2
0
Would love your thoughts, please comment.x
()
x
| Reply
Kelly Gissendaner's execution - the first of a woman in Georgia for 70 years - has been put off because of a winter storm. Check out her last meal request.