NBC’s Lester Holt will be taking over anchor duties from Brian Williams who is taking a few days after revelations surfaced that he lied about being shot down in a helicopter in Iraq. Here’s what you need to know about Lester Holt:

1. He Was Once Called the ‘Scud Stud’

In 2000, while covering the contested presidential election, Holt, then with MSNBC, helped the network’s rating increase 215 percent, with an audience increase of 407 percent.

Holt apparently is also known by a few different nicknames, drawn from his ability to remain on the air and anchor in good form for hours on end. After the tragedies of Sept. 11, 2001, MSNBC’s Mark Effron told People that Holt was called “Iron Pants.”

“Around here the nickname for Lester is Iron Pants, because he can sit down and anchor for hours.”

Holt’s maternal grandparents were born, raised and married in Jamaica, as he said in 2012. Holt’s father was an Air Force master sergeant, and Holt and his three siblings grew up on military bases.

Holt was born on March 8, 1959, in San Francisco to Lester and June Holt. He is the youngest of four children.

3. Holt Started As a Disc Jockey

Holt has said that, as a child, he would read the newspaper aloud into a tape recorder.

While in high school in Rancho Cordova, California, he was routinely asked to use the public address system.

“They called me the voice of the Cordova Lancers.”

He later worked for a Sacramento radio station while majoring in government at California State University, though he eventually dropped out of college to pursue his radio career full time.

In addition to his work in radio and television, Holt has appeared in several movies, playing a newscaster in films like Primal Fear, The Fugitive, and Miracle on 34th Street.

4. This Is Not His First Anchor Job

Lester Holt's reaction to the Brian Williams scandal in public vs his reaction behind closed doors. pic.twitter.com/owVg8RjOPe

Holt got his first shot at the anchor desk when, in 2000, an Air France Concorde crashed after take-off near Paris.

Holt told the New York Daily News that it was his knowledge of planes that led to his anchor job:

“I’m kind of a plane geek. If I hear one overhead, I can probably tell you what engine is in it. So they put me on camera with the anchors, and before I knew it, the anchors had left and I was in the seat.”

His TV career began in 1981, working as a reporter for the CBS affiliate in New York City.

Holt joined MSNBC in 2000, and became a substitute anchor for NBC Nightly News and Today in 2005. When anchor David Bloom passed away, Holt became a full-time co-anchor of Weekend Today and later succeeded John Seigenthaler on NBC Nightly News.

This is not even his first time taking Brian Williams’ spot. When Williams took a leave from his anchor job to have knee surgery in 2013, Holt subbed in as interim anchor.

Holt, originally from California, lives in New Yorjk with his wife, Carol. The couple have two sons, Cameron and Stefan.

Stefan Holt is walking in his father’s footsteps: He is currently an NBC anchor at WMAQ-TV in Chicago. 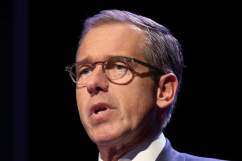 Brian Williams Going Off the Air: 5 Fast Facts You Need to Know

Loading more stories
wpDiscuz
1
0
Would love your thoughts, please comment.x
()
x
| Reply
NBC's Lester Holt will be taking over anchor duties from Brian Williams who is taking a few days after revelations surfaced that he lied about being shot down.