A woman is missing in Massachusetts just days after she was accused of throwing raw pork at cops. Police in Ashland, Massachusetts, are searching for Lindsay McNamara who was last seen on Valentine’s Day. Her family haven’t heard from her since February 13.

1. She Was Last Seen With 2 People Who Are Strangers to McNamara’s Family

According to a Facebook post from the Ashland Police Department, McNamara was last seen at a PF Chang’s restaurant in Natick, Massachusetts, on the night of February 14. She was with a man and a woman who are unknown to McNamara’s family. Police have been unable to locate her car since then. The last time her cell phone pinged was on February 14. She has blue eyes and brown hair. Anybody with any information about McNamara’s whereabouts is asked to called the Ashland police on 508 881 1212 extension 0.

2. She Appeared in a Viral Video That Showed Her Smearing Raw Pork Against a Police Station Counter

On February 11, Lindsay McNamara acquitted on charges of damaging property inside the Ashland police station. The Metro West Daily News reports that a judge decreed that cops couldn’t provide enough evidence that McNamara had caused actual damage to the station. On December 26, she went into the station with raw pork and announced that she was there to “feed the piggies.” She then smeared the bacon and sausage along the glass at the station’s front desk. When she was confronted by two cops, McNamara told them “Gold told me to feed the piggies.” The clip of the incident appeared on a Comedy Central show.

3. Her Mother Had Said That Her Daughter Needs Help

At the time of the “piggies” incident, McNamara’s mother, Regina, told CBS Boston that her daughter was going through a difficult time and that she needed help. During her potential trial for the incident, McNamara had insisted that she wanted to represent herself.

4. Her Sister Is Updating People on the Search via Facebook

McNamara’s sister, Cassie, posted on Facebook on February 16 that police have the security footage from around the PF Chang’s. She wrote, “I feel better knowing they are putting their resources to work to find her. Hopefully we will be able to track her from there and find her safe. I know that all your support and prayers will help make this happen.”

5. 1/6 of People Who Go Missing in the U.S. Have Psychiatric Problems

According to the Crime Library, nearly 1 million people were reported missing in the U.S. in 2014. On an average day, 2,300 people are reported missing every day. A spokesperson for the National Center for Missing Adults in Phoenix, says they have nearly 50,000 active cases that they are involved in. Over half of those missing are males. Important to not that 1/6 of those missing have psychiatric problems. 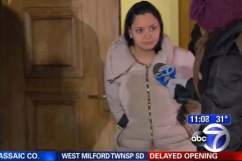 Loading more stories
wpDiscuz
2
0
Would love your thoughts, please comment.x
()
x
| Reply
A woman who recently went to the local police station with bacon, saying she was there to "feed the piggies," has gone missing from Ashland, Massachusetts.