ISIS has posted a video that shows Jordanian pilot Muath al-Kasasbeh being burned alive. The video was posted on February 3 by a Twitter account known for ISIS propaganda.

1. The Jordanian Government Confirmed That al-Kasasbeh Has Been Killed

Muath al-Kasasbeh, 26, had been held captive since December 2014. He had been on bombing run in Syria when he was forced to eject close to Raqqa. The pilot was quickly captured by ISIS fighters.

Al Jazeera reports that IS fighters claimed to have brought down his jet using a heat-seaking missile. In an interview with ISIS’ magazine, Dabiq, al-Kasasbeh said that he landed in the Euphrates river, reports The Guardian. Speaking to Reuters, a relative of the pilot said the family had been told by Jordanian government officials that al-Kasasbeh had been killed.

2. This Is the First ISIS Burning

The BBC reports, citing Jordanian TV, that officials believe that the pilot was killed on January 3. The network’s terror expert Frank Gardner said that the video’s release is “clearly intended to shock.”

This is the first time that ISIS uploaded an execution video that featured a burning. U.S. President Obama told the media in the aftermath of the execution this was “one more indication of the viciousness and barbarity of this organization.” He added, “…indicates the degree to which, whatever ideology they’re operating off of, it’s bankrupt … this organization only appears interested in death and destruction.” U.S. National Security Council spokesperson Bernadette Meehan also said, “The United States strongly condemns ISIL’s actions and we call for the immediate release of all those held captive by ISIL. We stand in solidarity with the Government of Jordan and the Jordanian people.” The BBC notes that a threat made by the Jordanian government to speed up the execution of ISIS prisoners “may now be carried out.” The AFP reports that the Jordanian military have vowed revenge on ISIS. Jordan is a member of the U.S. led coalition that has been bombing ISIS targets since July 2014. In response to the execution, King Abdullah II of Jordan has cut short his trip to the U.S. and will return home. 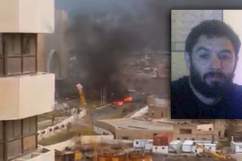 The photos and posts about Muath al-Kasasbeh’s execution appears to show him being burned alive. During his execution, Muath al-Kasasbeh was trapped in a cage. A news of his gruesome death spread on social media, many were citing the above image as being a better way to remember the fallen pilot. Previous execution videos uploaded by the group have shown beheadings. Lt. al-Kasasbeh was shown to be wearing the same orange jumpsuit worn by previous victims of the brutal group. The video is 22 minutes and 34 seconds long. The watermark on the video is of al-Furqaan, ISIS’ media wing. During the video, al-Kasasbeh discusses the mission he was on when he got captured in more detail. He says the names of pilots who flew with him as well as giving out the names of their bases. Before being killed, he is shown, surrounded by dozens of ISIS fighters clad in desert military fatigues. At the end of the video, Lt. al-Kasasbeh is buried.

ISIS had been seeking the release of would-be suicide bomber Sajida al-Rishawi from Jordan in exchange for al-Kasasbeh. In 2005, al-Rishawi was arrested for her part in a hotel bombing in the Jordanian capital of Amman that killed 60 people. Her suicide bomb didn’t explode but she was arrested soon after the explosion. ISIS had also set a ransom of $200 million for al-Kasasbeh’s release. The deadlock was brought about when ISIS refused to provide proof-of-life. In the hours after al-Kasasbeh’s execution video was released, Jordan announced that al-Rishawi would be executed on February 4, reports the AFP.

5. This Comes 3 Days After the Execution of Kenji Goto

His death comes just three days after the beheading of Japanese journalist Kenji Goto. The terror group released a video of Kenji Goto, 48, being beheaded on January 31.