A 6-year-old girl was killed by a ravenous group of piranhas in Brazil. The girl was vacationing with her family in the area of Rio Maicuru in the city of Monte Allegre, along the banks of the Amazon river. According to multiple media reports, the girl fell out of a canoe she was in with her grandmother. By the time she was rescued bloodthirsty piranhas has eaten the flesh from her legs. You can watch a video about how vicious the fish can be here:

Her grandmother told Brazil’s Globo TV Network, “I tried to hold onto her, but with all the other children around she slipped out of my grasp. I couldn’t see her any more when we got to the bank.” That network went on to name the girl as Adrila Muniz. There will be no charges of negligence in her death, which occurred on January 27.

The girls grandfather and mother were also in the canoe, reports Brazil’s Newsrondonia. That station adds that she died at the scene with witnesses recounting seeing her with exposed bone in the lower half of her body. Newsrondia posted some extremely graphic photos of the girl’s body.

In 2012, a girl named Aline Nery de Arujo, 5, was killed in the same region by the fish. A drunk 18-year-old man was also killed by the fish in Bolivia in 2011. Attacks in the Amazon basin appear to be most common when there is a dry season resulting in lower water levels. During one bizarre attack on Christmas Day 2013, 70 swimmers were hurt in Argentina. Fatal attacks by piranhas are rare. Rivers in Brazil carry warnings to swimmers about piranha attacks. 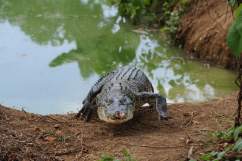 Loading more stories
wpDiscuz
0
0
Would love your thoughts, please comment.x
()
x
| Reply
A 6-year-old girl in Brazil died after piranhas ate her legs after she fell off her grandmother's canoe during a vacation.