Sabrina Dudish is the woman who used a post-sex picture of Patriots star Julian Edelman as her icebreaker on Tinder. The caption across the photo reads, “Just f**ked Edelman no lie.” A screenshot of her profile went viral today — three days after the Pats’ Super Bowl win — revealing her first name and making her an instant villain in Patriots Nation. Heavy uncovered Dudish’s full name after Boston nightclub owner Michael Winter named her on his Facebook page.

Here’s what you need to know about Dudish and her rise to infamy:

1. She’s Been Banned From Nightclubs in Boston

Even before her full name was revealed, Dudish drew the ire of Patriots fans everywhere for exploiting their beloved receiver and punt returner. She was eviscerated on Twitter.

Sabrina Dudish is done in Massachusetts as a whole lmao

Dudish was even banned from Boston nightclubs by locally famous promoter Michael Winter, who crudely insulted her appearance for good measure. Winter said on his Facebook page, “I haven’t blacklisted anyone from the nightclubs. YOU ARE BLACK LISTED ’86’d so stay in Metro West. Putting Edelman on Blast during celebration…Btw you’re a 5 if that and he was blackout. I’m sure I speak on behalf of many Boston Industry ppl to not show your face in this city.” 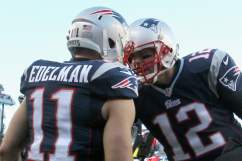 Since the scandal broke, Sabrina has deleted her Facebook and Twitter pages and set her Instagram account to private. While we don’t know her exact age, We know from cached pages on her Facebook profile that she’s a native of Natick, Massachusetts, who graduated from Natick High School in 2011 and attended Massachusetts Bay Community College.

Edelman didn’t seem to be letting the mini-scandal get to him as he celebrated the Patriots Super Bowl win in Boston on February 4. During the parade, Edelman posted pictures of himself with members of the Boston police using the hashtag “#BostonStrong.” Supermodel Christy Teigen told TMZ that she’s not impressed by Dudish and other Tinder braggers, telling the site “A lot of chicks do that sh*t. It’s so ridiculous. Everyone’s a little too proud nowadays. I think these girls should relax a bit.”

4. She’s the Second Woman to Broadcast Her NFL Sex on Tinder

Back in January, a woman named Stephanie was the first to announce her NFL sex exploits via Tinder. She posted an icebreaker that told the world that she had just “f**ked” Odell Beckham Jr. That hookup was the Giants receiver’s second best catch of the season.

5. Edelman Has Been Linked to Model Olivia Frischer

On the day of the Patriots/Seahawks Super Bowl, Frischer posted a football-themed picture (above) to her Instagram profile.