So if you’re still trying to work out what “goddamn” color this dress is we have the answer for you: It’s blue and black (not white and gold!).

Here’s the Roman Originals dress, just in case you don’t believe us:

The confusion — and the massive online debate — began when Swiked posted a photo of the dress with the plea: “Guys please help me — is this dress white and gold, or blue and black? Me and my friends can’t agree and we are freaking the f*ck out.”

With different people seeing different colors, the debate raged out of control until the photo above of the dress in question settled the debate about the real life dress. The reason for the conflicting color opinions was because of an optical illusion.

Apparently, it depended on how you had your laptop screen tilted when you looked at the photo.

According to Wired, the optical illusion works like this:

Light enters the eye through the lens—different wavelengths corresponding to different colors. The light hits the retina in the back of the eye where pigments fire up neural connections to the visual cortex, the part of the brain that processes those signals into an image. Critically, though, that first burst of light is made of whatever wavelengths are illuminating the world, reflecting off whatever you’re looking at. Without you having to worry about it, your brain figures out what color light is bouncing off the thing your eyes are looking at, and essentially subtracts that color from the “real” color of the object. “Our visual system is supposed to throw away information about the illuminant and extract information about the actual reflectance,” says Jay Neitz, a neuroscientist at the University of Washington. “But I’ve studied individual differences in color vision for 30 years, and this is one of the biggest individual differences I’ve ever seen.” (Neitz sees white-and-gold.)

Usually that system works just fine. This image, though, hits some kind of perceptual boundary. That might be because of how people are wired. Human beings evolved to see in daylight, but daylight changes color. That chromatic axis varies from the pinkish red of dawn, up through the blue-white of noontime, and then back down to reddish twilight. “What’s happening here is your visual system is looking at this thing, and you’re trying to discount the chromatic bias of the daylight axis,” says Bevil Conway, a neuroscientist who studies color and vision at Wellesley College. “So people either discount the blue side, in which case they end up seeing white and gold, or discount the gold side, in which case they end up with blue and black.” (Conway sees blue and orange, somehow.)

So now you know! 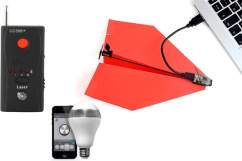 Read More
Breaking News, Science
It's the mystery that has driven the Internet crazy — is this dress blue and black or white and gold? Now all is revealed.