Lent is the 40-day period when religious abstain and do good works in preparation for the Resurrection of Jesus Christ on Easter Sunday.

Easter is the most important day on the Christian calendar, so believers prepare their hearts, minds and souls and open them up to God in preparation.

We compiled some things to know about the Lenten season which Roman Catholics, Western Orthodox Churches and some Protestant denominations, including Lutherans, Methodists, Presbyterians, Anglicans and other various churches celebrate.

The season of Lent is the 40 days before Easter and commences with Ash Wednesday.

In his Ash Wednesday message from last year, shown above, Cardinal Timothy Dolan, the Archbishop of the Archdiocese of New York, talks about what Lent means to him: “Lent is the time that the Lord invites us to come back home, come back to the Church.”

He continues by saying that followers should start the Lenten season with a simple prayer and a good confession in order to begin their spiritual journeys.

Lent is a favourable time for letting Christ serve us so that we in turn may become more like him. This happens whenever we hear the word of God and receive the sacraments, especially the Eucharist. There we become what we receive: the Body of Christ. In this body there is no room for the indifference which so often seems to possess our hearts. For whoever is of Christ, belongs to one body, and in him we cannot be indifferent to one another. “If one part suffers, all the parts suffer with it; if one part is honoured, all the parts share its joy” (1 Cor 12:26). 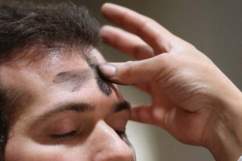 2. It Begins on Ash Wednesday With the Distribution of Ashes

Ash Wednesday fell on February 18th this year and followers started their Lenten journeys by getting ashes on their foreheads.

The ashes that are used are obtained from burning the palms from the previous year’s Palm Sunday, the Sunday before Easter that commemorates Jesus’ entry into Jerusalem. The palms are blessed with holy water, and then sit in burning incense to give them a scent. Priests, deacons and Eucharist ministers are able to administer ashes during the Ash Wednesday service.

They are drawn on the forehead in the shape of a cross and serve as a sign of humans’ sinfulness and need for penance. While they are being placed on the worshiper’s heads, the priest says, “Remember that you are dust, and to dust you shall return.” This is taken from Genesis 3:19 in the Bible. Another Bible quote that the priest may choose to recite, taken from from Mark 1:15, is “Repent and believe in the Gospel.”

Heavy talked to John Wachowicz, a Seminarian at the Diocese of Rockville Centre in New York, to gain insight into the meaning of the day and its origins. He said, “The ashes and fasting of Ash Wednesday assist us in entering into the penitential season of Lent with the proper disposition.”

3. It Ends on Holy Thursday

Lent officially ends on Holy Thursday. On that day, followers commemorate The Last Supper, where Jesus ate one last meal with his apostles before being crucified on Good Friday.
He blessed bread and wine with the very words priests use today to consecrate the Body and Blood of Christ during mass.

He took the bread and said, “Take eat of it all of you, for this is My body which shall be given for you, do this in remembrance of Me.” hen he raised the cup of wine, saying, “This is My Blood of the New Covenant, which shall be shed for you.”

In telling His disciples to “Do this in remembrance of Me,” he started the tradition of Sunday mass.

Watch The Last Supper scene in the 2014 movie Son of God in the clip above.

According to AmericanCatholic.org, Catholics between the ages of 18 and 59 must fast on Ash Wednesday. Fasting entails eating one regular-sized meal and two small meals daily.

All Catholics 14 years old and up should abstain from meat on Ash Wednesday, Good Friday and all Fridays during Lent. Last year, during his Ash Wednesday mass in Rome, Pope Francis talked about the true meaning of fasting. “Fasting makes sense if it really chips away at our security and, as a consequence, benefits someone else, if it helps us cultivate the style of the good Samaritan, who bent down to his brother in need and took care of him,” he said.

The Pope explained that fasting “is a sign of becoming aware of and taking responsibility for injustice and oppression, especially of the poor and the least, and is a sign of the trust we place in God and his providence.”

5. People Should Do Good Works

Join us in participating in CRS Rice Bowl this Lent! We've blessed our rice bowls and staff are ready to give! #RiceBowl #CatholicImpact @CatholicReliefServices

One of the things that Catholics do during lent is participate in the Rice Bowl, which Catholic Relief Services instituted. Seventy-five percent of donations supports CRS’ programs worldwide. Twenty-five percent of the money collected goes to end hunger and poverty in your own community.

This unique charity effort is celebrating its 40th anniversary this year. Watch the video below to see the good works in action.

In his message, Pope Francis also said, “Second, we can help by acts of charity, reaching out to both those near and far through the Church’s many charitable organizations. Lent is a favourable time for showing this concern for others by small yet concrete signs of our belonging to the one human family.”

According to Wachowicz, a popular tradition in Rome starts on Ash Wednesday where Catholics visit a different church each day of Lent. The list of Churches may be found here.

Loading more stories
wpDiscuz
2
0
Would love your thoughts, please comment.x
()
x
| Reply
Lent is the 40-day period of fasting and doing good works before Jesus' Resurrection on Easter Sunday. Here is some insight into the season.