Zahra Schreiber is the aspiring WWE diva who has been caught in nude sexting scandal with established wrestling star Seth Rollins. Schreiber is signed to the WWE’s developmental wing, NXT, while Rollins is one of the company’s most bankable stars. This can only end well. Except for Rollins, who has a fiancee.

1. Rollins’ Fiancee Did Not React Well to Photos of Schreiber Appearing on her Man’s Instagram

The photos of a nude Schreiber first turned up on Rollins’ Instagram on February 9. They’ve since been deleted and Rollins has apologized.

That didn’t stop them from appearing on the WWE’s official website thanks to an automatic link between the site and their wrestler’s social media profiles. Wrestling News is speculating that Rollins was hacked somehow.

That speculation echoes Rollins’ apology. Despite the apology, Rollins’ fiancee Leighla Schultz has since posted naked pictures of Rollins on her Twitter with the comment “Zaharah?” Then in a serious of Facebook comments, Schultz using quotation marks saying things like “I love you so much baby” and “I hate my life and my fiancee I just want to run away with you.” 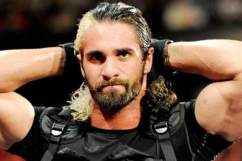 2. A Source Told Heavy.com That She Regularly Cheated on Her Fiance

She is engaged Chad Ruhlig, the lead singer metalcore band For the Fallen Dreams. The band are also from Saginaw. Speaking to Heavy.com, a friend of Chad’s, Melissa, said that the last time she checked, around the three weeks ago, they were still engaged. Melissa told us that Chad bought Schreiber a big black stone ring. She also said that the couple owned a small house in Saginaw together. He was very supportive of her move to the WWE and Melissa said Chad “would have given her the world.” Melissa then said that when Schreiber worked at the Grand Central Bar in Saginaw, the WWE diva would brag about cheating on Chad and how he had no idea.

Chad has been with his band since the beginning, first as bass player, then as lead singer. He left the band 2008 only to rejoin in 2013. The band’s latest album, Heavy Hearts, was released in 2014.

3. When Schreiber Signed With the WWE She Said She Was ‘So Humbled & Appreciative’

According to wrestling database PWPIX, Schreiber was signed to the WWE’s NXT program in October 2014. Her signing came despite her heavily tattooed body which PWPIX notes “WWE officials generally frown upon tattoos on female talent, so her addition to the roster is change.” Her first trial with the company in March 2014 was unsuccessful. Upon signing, Schrieber wrote on her now privatized Instagram page:

Words cannot even describe. I am so humbled and appreciative of this opportunity. The greatest company in the world giving little ol me a chance, unbelievable.

4. She Learned How to Wrestle With Ring of Honor

She’s a native of Saginaw, Michigan. Schreiber trained at the House of Truth Wrestling School under the tutelage of the legendary Jimmy Jacobs.

Prior to joining the WWE, Schreiber had been working as a professional model and former band manager, according to her Tumblr page. Her real name is Brittney Schreiber.