The man who deliberately killed 149 innocent people by crashing a plane into the side of a mountain should never have been allowed to fly. Three days after the Germanwings plane crash in the French Alps, pilot Andreas Lubitz’s mental health has come under scrutiny, with no proof that he actually suffered from depression. Police who searched the mass murderer’s Dusseldorf apartment found torn-up notes from a doctor stating that Lubitz shouldn’t have been allowed to fly at the time of the crash.

1. He Suffered From an ‘Existing Illness’ But Not Depression

Germanwings co-pilot Andreas Lubitz, who murdered 149 people on Flight 9525, is pictured on the March 27 front page of Bild, Germany’s largest tabloid. The paper calls him the “man who became a mass murderer.”

The prosecutor’s office in Dusseldorf, the city where Lubitz lived some of the time, said, via Reuters:

Documents with medical contents were confiscated that point towards an existing illness and corresponding treatment by doctors. The fact there are sick notes saying he was unable to work, among other things, that were found torn up, which were recent and even from the day of the crime, support the assumption based on the preliminary examination that the deceased hid his illness from his employer and his professional colleagues.

It was added that no suicide note or “evidence of a political or religious background” motivation for the crash was found.

According to a statement from the University of Dusseldorf’s hospital, Lubitz was last there on March 10 when he was treated for an undisclosed condition. The hospital adds that he was not being treated for depression. Professor Dr Klaus Hoeffken of the facility said, “We will entirely and unreservedly support the investigations of the state prosecutor. Our deepest sympathy goes out to the victims of the plane catastrophe.” The Wall Street Journal, citing a source in German, reported that Lubitz was being treated by a neuropsychologist in the time leading up to the crash.

2. Lubitz Had Ordered 2 Audis for Him & His Fiancee

According to a report from Germany’s Focus magazine, Lubitz had ordered two Audis from a dealership in Dusseldorf. A week before the crash, he canceled the order for one of those Audis, reports Bild. The tabloid further reports that Lubitz and his fiancee, who has so far only been identified as having the last name “Goldbach.”

3. In 2009, He Postponed His Lufthansa Training

Speaking to the Frankfurter Zeitung, a woman who identified herself as the mother of a friend of Lubitz, said the mass murderer has suffered a “burnout” and “depression” in the past. German tabloid Bild reports that this burnout coincided with his dropping out of Lufthansa training in 2009. Carsten Spohr, the company’s CEO, told the media that Lubitz had taken a break during his training but didn’t comment further.

4. Sufferers From Depression Are Outraged That the Massacre Is Being Tied to Depression

Shame on @MailOnline for stigmatising depression. I've battled depression for years but it doesn't make me want to kill 152 ppl @MindCharity

As speculation about Lubitz’s mental state grew, several websites and newspapers highlighted the links to depression. The Daily Mail ran with the headline “Suicide pilot had a long history of depression – why on earth was he allowed to fly?”

The chief executive of Mind, a mental health information website, Paul Farmer, told the BBC, “Everyone is trying to understand what happened in this terrible tragic plane crash, but there is a real danger that a correlation is being made between depression and this act, which is overly simplistic and has no evidence attached to it all.”

5. Authorities Have Found 400-600 Pieces of Human Remains So Far

As the retrieval efforts go on for the victims of the Germanwings flight, French police say that no intact bodies have been found. A spokesman added that 400-600 pieces of human remains have been found. 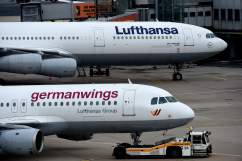 WATCH: How to Lock & Unlock an Airbus A320 Cockpit Door

Read More
5 Fast Facts, Breaking News, Plane Crash
wpDiscuz
5
0
Would love your thoughts, please comment.x
()
x
| Reply
The pilot who killed 149 people after slamming his plane into the side of a mountain had recently been treated at a hospital but not for depression.