Israeli Prime Minister Benjamin Netanyahu will address a joint meeting of Congress at 11 a.m. Eastern time. The speech comes just two weeks before general elections in Israel. The premier was invited by Speaker John Boehner with Iran’s nuclear development expected to be a key topic.

Further adding to Obama’s anti-speech stance, White House Press Secretary Josh Earnest told the media on the day before the speech, “I haven’t looked at the president’s schedule for tomorrow. I doubt that he will spend his whole time watching the speech.” The Obama administration’s stance had been that the partisanship U.S. lawmakers were showing towards Netanyahu would be “destructive” to the long-standing relationship between American and Israel. 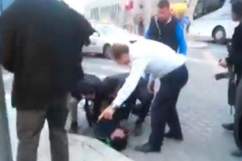 WATCH: Jerusalem Mayor Takes Down Palestinian Terrorist With Own Hands