The White House is on lockdown after a loud noise was heard prior to the departure of President Barack Obama, sources say. Here’s what you need to know:

1. A ‘Loud Noise’ Was Heard and a Vendor Cart Caught Fire

Secret Service spokesman Brian Leary told The New York Times that a vendor cart caught fire at about 10 a.m. Saturday at 15th and G streets, just a few steps away from the White House. Firefighters contained the blaze.

At the same time, ‘loud bang’ was heard at the White House, which is what apparently sparked the lockdown. It appears that the two incidents are related.

2. Obama Was Leaving for Selma Commemoration

Air Force One on the tarmac at @AndrewsAirForce awaits arrival of First Family for flight to Selma. pic.twitter.com/3jZUc9a6b4

President Barack Obama and his family were on their way to get on a helicopter to Andrews Air Force Base to take Air Force One to Alabama.

This weekend is the 50th anniversary of the Civil Rights marches from Selma, Alabama, and Obama was scheduled to take part, as are many legislators.

According to media reports, the Obamas left the building, 30 minutes late for the event in Selma, by motorcade instead of helicopter.

3. A Bomb-Sniffing Dog Alerted Police to a Vehicle

As the Secret Service investigated both the ‘loud bang’ and the vendor cart fire, a bomb-sniffing dog alerted police to a vehicle in the area.

4. Members of the Press Were Moved to Safety

The view of the @WhiteHouse from the Washington Monument today pic.twitter.com/Tv1l0jkvLk

When the ‘loud noise’ was heard, Secret Service agents hustled members of the press into a briefing room and lock the doors. The building was immediately put on lockdown.

5. Things Appear to Be OK, but the Lockdown Continues

According to a press pool report, the investigation is continuing but tensions do not appear to be high in the area:

“Lockdown continues, although it doesn’t appear as though there’s a high level of consternation among Secret Service walking outside.” 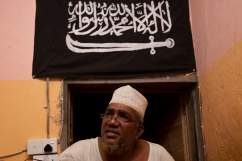 Loading more stories
wpDiscuz
0
0
Would love your thoughts, please comment.x
()
x
| Reply
The White House is on lockdown after a loud noise was heard prior to the departure of President Barack Obama, sources say.