Chuck Bednarik, considered one of the toughest players in football history, has died at the age of 89. (Twitter)

Chuck Bednarik, considered one of the greatest football players of all time and member of the Pro Football Hall of Fame, has died. Here’s what you need to know:

Bednarik was a linebacker and a center for the Eagles between 1949 to 1962. He is considered by many football historians to be the last of the great “two-way” players.

When asked during a 2011 interview about modern football players playing both offense and defense, Bednarik said, “That’s football. That’s the way it should be.”

He was a resident at an assisted living facility in Richland, Pennsylvania, at the time of his death early Saturday at the age of 89.

The Eagles, in a statement issued after Benarik’s death, recalled the 1960 NFL Championship Game, in which he played nearly every minute of the game as both a linebacker and a center against the Green Bay Packers.

The Eagles won against the Packers, 17-13 Eagles.

That same season, Bednarik tackled New York Giant Frank Giffords so hard that he got a concussion and didn’t play again until 1962. A photo of Bednarik standing above Giffords prone body, pumping his fist, later became iconic.

2. He Was Known as ‘Concrete Charlie’

Bednarik was known as “Concrete Charlie” thanks to his off season job as a concrete salesman for the Warner Company.

During his time with the Eagles he helped the team receive eight Pro Bowl nominations andeight All-Pro nominations Bednarik was inducted into the Pro Football Hall of Fame in 1967.

The Eagles retired his No. 60 jersey, only one of nine numbers to be retired by the team. Eagles’ coach Chip Kelly said Bednarik was the foundation of the team:

“I have had the opportunity to spend time with Chuck Bednarik, who is truly one of the most unique players that this game has ever seen. The foundation of this organization and this league is built on the backs of past greats, with Chuck at the forefront. The way he played the game with an endless passion and tenacity helped establish the standard of excellence that this organization stands for; one that we strive to achieve each and every day.”

3. He Was A Pennsylvania Native

Bednarik was born on May 1, 1925, in Bethlehem, Pennsylvania, played for the Eagles for his entire career, raised his family in Pennsylvania and died in the state. Club President Don Smolenski said Bednarik was a Philadelphia Eagles legend:

“So many of the timeless moments in Eagles history are associated with Chuck Bednarik. He played his entire career in Philadelphia, college and pro, and he lived his entire life here and in the Lehigh Valley. He was a proud competitor and a dedicated and devout family man who loved Eagles fans as much as they loved him. He left his mark on this team and will forever be a legend within this organization.”

Bednarik often showed his gnarled, twisted fingers later in life, as a reminder of the way the game was played when he was a star. His salary never exceeded $27,000 in a single season, which is why he had to sell concrete in the off season.

Bednarik one reportedly resorted to pawning his championship ring and his Hall of Fame ring in order to make ends meet.

Eagles owner Jeffry Lurie said the “workmanlike” attitude fans have come to expect from the Eagles is derived from how Bednarik played the game:

“Philadelphia fans grow up expecting toughness, all-out effort and a workmanlike attitude from this team and so much of that image has its roots in the way Chuck played the game.”

5. He Served in WWII

Before playing football for the University of Pennsylvania, Bednarik was a B-24 waist gunner, flying 30 missions during WWII.  He was later awarded the Air Medal.

He was the Eagles’  first overall draft choice 1949, after playing for the University of Pennsylvania, earning All-America honors in his last two seasons playing for the university. In 1995, the Maxwell Football Club began awarding the “Chuck Bednarik Award” to college football’s best defensive players. 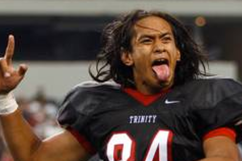 Loading more stories
wpDiscuz
0
0
Would love your thoughts, please comment.x
()
x
| Reply
Chuck Bednarik, considered one of the greatest football players of all time and member of the Pro Football Hall of Fame, has died.