The brutal beating of a black Michigan man by white police officers during a traffic stop in suburban Detroit has sparked outrage in the community and on social media nationwide, with protests planned and comparisons drawn to the LAPD’s infamous assault of Rodney King.

Floyd Dent, a 57-year-old father and auto worker with no criminal record, was arrested January 28 by police in Inskster, a town in Wayne County. A dashcam video of the arrest was obtained March 24 by WDIV-TV, a Detroit news station.

All charges against Dent were later dropped and Officer William Melendez was arrested on charges including assault, mistreatment of a prisoner and misconduct in office, according to WDIV. The prosecutor announced the charges against Melendez on April 20.

The dashcam video shows Dent pull over to the side of the road. He opens his door and is pulled out of the car by two officers, who shove him to the pavement. Dent, one the ground, is grabbed around the neck by one of the officers, identified in the police report as Officer William Melendez, while the other officer, an unidentified auxiliary officer, tried to handcuff him. Melendez can be seen punching Dent in the head 16 times while still holding him around the neck.

2. The Police Officers Are Claiming Self-Defense

According to The Associated Press, Melendez claims the situation escalated when he thought he saw Dent reaching for a weapon. There were no weapons found in the car. Melendez also said during the struggle on the ground, Dent bit him on the arm. Dent denies biting Melendez.

The Detroit Free Press reports that police said Dent gave the officers a blank stare as if on narcotics when they asked him to show his hands and then said “I’ll kill you.” Dent also denies those accusations, and the audio of those moments is not available. Dent told the Free-Press the officer yelled, “Get out of the car! I’ll blow your head off!”

The officers are on administrative duty, police said. 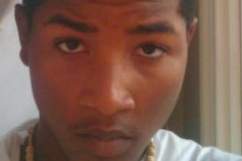 3. One of the Officers — Nicknamed ‘Robocop’ — Was Charged With Planting Evidence While He Was a Detroit Cop

@curlyheadRED @deray “@ShaunKing: This is William Melendez. The officer who nearly killed #FloydDent. Read this. pic.twitter.com/y2zwOGWavZ”

William Melendez, the officer seen hitting Dent in the head, was charged in 2004 along with seven other Detroit officers with lying, falsifying reports and planting evidence, according to The Associated Press. He was acquitted of the charges. Prosecutors alleged he and another officer were the “masterminds” of a conspiracy to “run roughshod over the civil rights of the victims.”

Dent’s attorney, Gregory Rohl, told the Free Press that the video shows officers planting the crack cocaine. Dent turned down a plea agreement during a March 25 court appearance. He did not test positive for drugs after the arrest. The charges were later dropped. 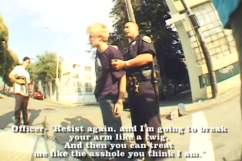 4. Dent Spent 3 Days in the Hospital 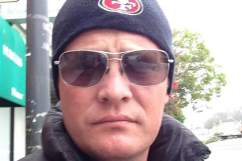 5. Protesters Gathered Outside the Police Department Calling for an Investigation

Dozens of protesters gathered outside of the police department demanding the officers involved be fired, according to the Detroit News. They briefly entered the building and were led back outside by Police Chief Vicki Yost. She told the protesters, “I am encouraging people to let the investigation run its course. Then we will act accordingly.”

The incident is being investigated by Michigan State Police.

A former Inkster chief, Hilton Napoleon, was at the protest and said he tried to fight dysfunction in the department while he was in command, according to the newspaper. He told the Detroit News he thinks the department should be disbanded:

I would disband this department and turn it over to the sheriff’s department. You do have good officers out here but you have enough bad apples to poison the system. You have officers out here that need to go turn their badges in right now. I said that when I was chief.

One protester, Rev. Charles Williams II, told the newspaper that Inkster is “the new Ferguson,” saying “We need the Inkster police department to restore the trust to the residents and to those who have to drive through. I didn’t feel safe coming to Inkster today. I don’t feel safe right now.” 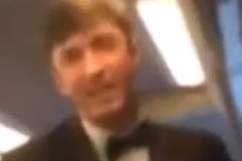