A member of the Illinois National Guard was arrested at a Chicago airport on charges that he conspired to support the Islamic State, the Department of Justice announced Thursday.

“According to the charges filed today, the defendants allegedly conspired to provide material support to ISIL and planned to travel overseas to support the terrorist organization,” Assistant Attorney General John Carlin said in a statement. “In addition, they plotted to attack members of our military within the United States. Disturbingly, one of the defendants currently wears the same uniform of those they allegedly planned to attack. I want to thank the many agents, analysts and prosecutors who are responsible for disrupting the threat posed by these defendants.”

Both men were charged in a federal criminal complaint with one count of conspiring to provide material support and resources to a foreign terrorist organization. They face up to 15 years in prison if convicted.

1. Hasan Edmonds Was Going to Fly to Cairo

According to the federal complaint, Hasan Edmonds, 22, was going to use his military training to fight overseas. Hasan was planning to fly Wednesday from Chicago Midway Airport to Cairo, with stops in Detroit and Amsterdam, authorities said.

Edmonds “came to the attention of the FBI in late 2014 and have been investigating him since, including through the use of two undercover agents.

According to the complaint, one of the agents asked Edmonds to obtain military training manuals and weapons specifications, which he did. The agent told him to bring it with him when he traveled to Egypt. Edmonds was under the impression that the agent he was talking to online was already in the Middle East and he would be joining him there, according to the complaint.

Edmonds was told by the agent to travel from Egypt to Derna, Libya, and provided him with information about what he would be doing when he arrived.

He graduated from Aurora West High School in 2011 and also studied at Robert Morris University in Chicago, according to the FBI and his Facebook profile.

To be honest, we didn’t know anything about my brother trying to travel across seas nor did we know about the supposed attacks my cousin was supposedly doing. … They don’t go out seeking trouble. … Neither one of them come off as terrorists. They aren’t terrorists. I do not feel as if my cousin or brother would ever do anything of such nature. My brother is very, very much so … what is the word I am looking for .. he is always .. into the military .. and wanting to join the Army.

Travis Edwards, a cousin of Hasan and Jonas, posted on Facebook that they are not terrorist:

The feds ran in my auntie house and at the same time ran in my Lil cousin house and went to my moms house and they locked up my two Lil cousins for being Muslim saying they might be terrorist or might be recruiting for Isis my Lil cousins are not terrorist they are young Muslim brothers with family’s and children my family are practicing Muslims with no threatening ties to no terrorist groups they are asking the Muslim women in my family bogish questions and even went as far as to ask were they part of some elaborate scheme they are holding my family down town Chicago at the federal building ain’t no telling how many of there rights been violated they took all the computers cell phones had my family confined for hours for nothing my cousins ous just young muslins that love and worship there creator may Allah find favor in my family and free my cousins of any alleged wrong doing you brothers and sisters keep them in y’all prayers ………..free Abu isa and hasan .rasheed Edmonds.

2. Jonas Edmonds Planned a ‘Body Count’ of 100 to 150 at the Illinois Military Facility

Prosecutors say Jonas Edmonds, 29, was planning an attack on a military facility in northern Illinois where Hasan had been training, authorities said.

On March 23, the cousins met with one of the undercover agents in Aurora. Jonas told the agent he wanted to attack the base with him and “anticipated a ‘body count’ of 100 to 150 individuals,” according to the criminal complaint. But Hasan Edmonds “corrected Jonas Edmonds and advised that the number would be closer to 120.”

Jonas Edmonds said he would buy weapons, including AK47s and grenades, from a third party after Hasan traveled overseas.

Hasan said he would give his cousin and the agent a list of “rankings,” which the FBI believes referred to the officers at the military facility and said they should “kill the head.” He told Jonas he would provide him with his military uniforms to gain access to the base.

The cousins and the agent drove to the military facility on March 24 and talked about “purchasing weapons and how to conduct an attack,” according to the complaint. They also discussed where soldiers train and Hasan described the inside of the installation and which rooms they should avoid during the attack. Hasan also entered the installation to get a military training schedule, which he gave to Jonas.

Jonas Edmonds was arrested at his home in Aurora without incident, the FBI said.

The FBI said Jonas has a prior felony conviction in Georgia that resulted in him serving time in prison. According to Cobb County court records, he served time in prison from 2004 to 2010 for armed robbery.

A National Guard spokesman, Lt. Col. Brad Leighton, told the Tribune that the Guard had been notified of the investigation while it was ongoing. Hasan’s access to computers and equipment were discretely restricted and he was given different duty, Leighton said.

He said Edmonds joined the Guard in 2011 as a supply specialist.

According to the complaint, one of the agents sent Hasan Edmonds a friend request and began communicating with him. It’s not clear in the affidavit how the FBI became aware of Edmonds or why they contacted him. The agent sent a friend request to Edmonds, whose profile was then Hasan Rasheed (his middle name) in late 2014.

On Jan. 19, 2015, Edmonds sent a message to the agent through Facebook. The agent told Hasan he was an ISIS fighter located outside the U.S. According to the criminal complaint:

In his message, Hasan Edmonds appeared to indicate that he was planning on going on a trip and asked UC1, ‘Say akhi (brother) you speak arabic? I’m trying to get my affairs in order and get my funds up for the plung [sic], thought it was smart to plug in with my brothers while I prepair [sic].’ Hasan later clarified, ‘And i meant plunge. It means to dive/jump in eagerly. I want to make sure my affairs here are all set before leaving to give my all for this deen (faith). It would have left months ago. insahAllah (Allah willing) soon though. I am working at it each day.

4. Hasan & His Cousin Said They Wanted to ‘Do Something Like the Brothers in Paris Did’

According to the FBI complaint, Hasan Edmonds told an undercover agent “honestly we would love to do something like the brothers in Paris did,” which the FBI said is a reference to the Jan. 7 terrorist attack on the Charlie Hebdo newspaper by two brothers.

He told the agent they could “hit” in the U.S. and then go to the Middle East.

5. A Former Air Force Mechanic Was Recently Charged With Trying to Join ISIS

A former U.S. Air Force mechanic with radical Islamic beliefs and ties to the Middle East was arrested March 17 and accused of trying to join the terror group ISIS in an effort to “fight violent jihad”. 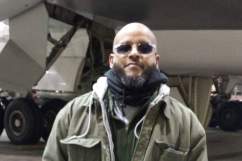 Loading more stories
wpDiscuz
2
0
Would love your thoughts, please comment.x
()
x
| Reply
Hasan Edmonds, a member of the U.S. National Guard, has been arrested on federal charges that he planned to use his military experience to join ISIS.