A Mexican professional wrestler has died after a botched move during a match with a former WWE superstar.

Aguayo, the son of legendary Mexican wrestler Perro Aguayo, was teamed with Total Nonstop Action wrestler Manik against Mysterio, who recently left the WWE, and TNA wrestler Tigre Uno in a match staged by the independent lucha libra organization CRASH.

According to The Associated Press, Aguayo died at about 1:30 a.m. local time at a hospital about one block from the arena. The Baja California state prosecutor’s office said it has opened an investigation into his death, the AP reports.

1. It’s Not Yet Known What Caused Aguayo’s Death

According to PWInsider.com, initial reports have indicated Aguayo died of cervical spine trauma. But another report by TopRopePress.com said Aguayo died from trauma to his trachea and whiplash.

An autopsy will conducted by the local medical examiner to determine the official cause of death, the prosecutor’s office said. It will include testing for alcohol and drugs.

Video of the match and its aftermath have been posted online, though it’s not clear what moment caused Aguayo’s fatal injury. Aguayo was on the middle ring rope when his fellow wrestlers and ringside officials noticed he was unresponsive. The match continued briefly as officials tried to revive Aguayo and medical personnel responded.

Aguayo was slumped over the middle rope when he stopped responding, in the position that typically leads to Mysterio’s famed finisher, the “619,” a swinging dropkick through the ropes. PWInsider.com describes what led up to Aguayo collapsing on the ropes:

All four men are battling in the ring when Aguayo is nailed with a missile dropkick. He takes a bump that results in him flopping over and landing on his stomach. He returns to his feet and takes a head scissors from Mysterio, bumping outside to the floor, twisting his body while running to take the move and go through the ropes. Aguayo lands on the outside and returns to the ring and is dropkicked, resulting in him landing against the ropes in the traditional position to take the 619. It appears Aguayo may have suffered a spinal trauma while taking the bump to the outside of the ring, not realized it (possibly due to the adrenaline of performing) and worsened the injury taking the dropkick after he returned to the ring.

The full match can be seen below. The sequence leading up to Aguayo’s death begins at about the 6-minute mark. Warning: The video includes graphic content: 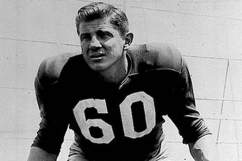 2. Aguayo Has Been a Professional Wrestler Since He Was 15

Pedro Aguayo Ramirez wrestled under the name El Hijo del Perro Aguayo (the Son of Perro Aguayo). He is the real life son of Perro Aguayo, a Mexican wrestling legend. The younger Aguayo has been part of several since his first match in 1995, including Asistencia Asesoría y Administración and Consejo Mundial de Lucha Libre.

Lucha Libre AAA posted a statement on its website that translates to:

Lucha Libre AAA feels much the loss of one of their star talent, praying for the repose of Pedro Aguayo Ramírez, in addition to the early resignation of his relatives. We thank the media support, understanding, respect and discretion at such a difficult time.

Aguayo’s tag team partner for Friday night’s match, Manik (also known as TJ Perkins), was among several wrestlers to tweet about his death:

Life goes so fast man. I can't believe some of us pack our bags and don't make it home.

We've lost a great friend and one of the best in Lucha history, we all crying for you mi amigo Pedro. #AdiosPerro

Out industry has lost a great performer. I never met him but I have the utmost respect for his work. RIP Perro Aguayo Jr.

El Hijo del perro Aguayo Respect to fallen brother in arms! I and the WWE universe pray for your peace an comfort to your family! 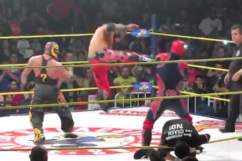 3. Mysterio Was in the Ring With Aguayo When He Debuted 20 Years Ago

Mysterio said on Instagram that he was in the ring with Aguayo when he debuted in AAA in 1995:

I had the privilege to share a ring for the first time with Hijo Del Perro Aguayo in his debut as a professional wrestler & an Honor to be in the Ring with this great Legend for the last time! You will be missed Perro:: RIP Perro Aguayo Jr.

Mysterio tweeted Saturday about Aguayo’s death, in Spanish, saying he and Aguayo were “becoming brothers after all these years.” Mysterio also said that “we shouldn’t question the decisions of God,” but that he wonders why Aguayo died and doesn’t understand God’s choice. He said he would keep Aguayo with him for the rest of his life and also offered condolences to Aguayo’s family.

Mysterio, real name Oscar Gutierrez, started his career in Mexico before moving to the United States to wrestle in the now-defunct prganizations Extreme Championship Wrestling and World Championship Wrestling. Mysterio joined the WWE in 2002 and quickly became one of its most popular stars.

He became WWE’s World Heavyweight Champion in 2005 and held several other titles before injuries sidelined him in 2013.

Mysterio’s contract with WWE ended in February, according to PWInsider.com. Mysterio recently made his return to Mexico, fighting for the first time in the country where his career began in another tag team match at an AAA event. He also faced Aguayo in that fight. 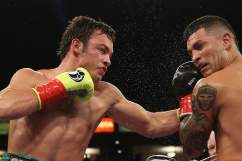 4. It Took Several Minutes for Aguayo to Receive Medical Help

According to Mediotiempo.com, medical personnel were delayed in coming to Aguayo’s aid because they were backstage treating wrestlers who had been injured earlier in the show. Aguayo was taken out of the ring on a piece of plywood because a stretcher wasn’t available, according to the report.

The video shows the other wrestlers trying to get the referee’s attention to Aguayo’s condition. Outside the ring, Konnan (a former WCW and TNA wrestler working as a ringside official) goes to help Aguayo, and shakes him as he hangs motionless on the ropes. Eventually EMTs come to the aid of Aguayo.

A doctor told Mediotiempo that he and others worked on Aguayo for about an hour at the hospital trying to revive him, but were unsuccessful.

According to the Mexican newspaper Zeta, initial reports were that Aguayo had lost consciousness

Video of Aguayo being loaded into an ambulance was uploaded to YouTube by Zeta (Warning: Graphic Video) 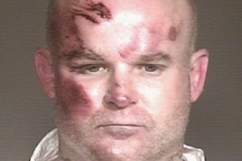 5. In-Ring Deaths Are Not Common, But Have Happened Before

Although pro wrestling is staged, the impact and physical nature of the performance has led to serious injuries and deaths.

The Mexican wrestler Oro (real name Jesus Javier Hernandez Silva) died in 1993 while fighting in a match in Mexico City. Oro, 21, died after landing on his head and neck. An autopsy was never done, but it appeared he died of a brain aneurysm.

In 2009, a Japanese wrestler died after a suplex was botched, according to ESPN. Mitsuharu Misawa landed awkwardly after a common suplex maneuver, and was fatally injured.

One of the most well-known deaths was the result of an equipment malfunction. Owen Hart died during a 1999 WWF pay-per-view after his harness failed as he zip-lined toward the ring, sending him plummeting to his death.

Other wrestlers have been paralyzed because of botched moves. In 1999, Darren “Droz” Drozdov, a former NFL lineman, was paralyzed as a result of a routine powerbomb during a match with D’Lo Brown. In 2002, Hayabasua, one of Japan’s top wrestlers at the time, was paralyzed after landing on his neck while executing a flipping move called a moonsault.

The website WhatCulture.com has a list of 13 in-ring deaths. Many were the result of heart attacks or other medical conditions. 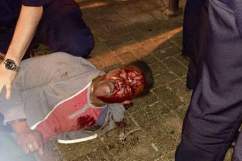