The longtime spokesman for the late Missouri state auditor Tom Schweich was found dead of an apparent self-inflicted gunshot wound about a month after his boss committed suicide, according to the St. Louis Post-Dispatch.

Spence Jackson, 44, was discovered Sunday at his apartment in Jefferson City, the state’s capital.

Schweich, a Republican candidate for governor, fatally shot himself in his Clayton, Missouri home in February.

1. A Note Was Found in Jackson’s Apartment

DEVELOPING: Jefferson City pd say they did find a note in Spence Jackson's apt that points them to suicide.#stl pic.twitter.com/H9WOhX8WfC

Police said at a Monday press conference that they found a firearm, a spent cartridge and a note in Jackson’s apartment.

On Tuesday, police held a press conference to release the contents of the note, a per the wishes of Jackson’s family. The note, dated March 27, 2015, said only “I’m so sorry, I just can’t take being unemployed again.”

Jackson lived alone at the apartment. His family had last heard from him Friday and his mother called police to ask them to check his apartment Sunday night after being unable to reach him, police said, according to the Post-Dispatch. He was still working for the Auditor’s office after Schweich’s death.

Police said toxicology reports haven’t been completed yet, and the preliminary cause of death was a single gunshot wound to the head.

According to police, they have worked with the state Auditor’s office to learn about his actions in the days before his death. He went to work Friday for a partial day after taking Thursday off. He left at noon Friday for a lunch break at noon and didn’t return. He acted normally Friday while at his office, coworkers told police.

2. Schweich Was a Top Contender in the Missouri Governor’s Race

Schweich, 54, was considered a frontrunner for the Republican nomination prior to his death. He was facing off against former U.S. attorney Catherine Hanaway for the role. In November 2014, he had been re-elected as Missouri’s state auditor. He was first elected to the office in 2010.

Schweich formerly served as U.S. Ambassador to Afghanistan. Prior to that he was the U.S. Coordinator for Counternarcotics and Justice Reform in the country, a role he was promoted to by President George W. Bush. His first job in government was helping Senator John Danforth’s investigation into the 1993 Waco siege. Before his work took him to Afghanistan, Schweich was the chief of staff to three U.S. Ambassadors to the United Nations.

He is survived by his wife Kathleen and their children Emilie and Thomas. 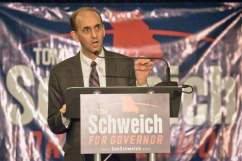 3. Jackson Accused a Fellow Republican of Leading an Anti-Semitic Campaign Against Schweich

After Schweich’s death, Jackson called for the resignation of state GOP chairman John Hancock, accusing him of leading an anti-Semitic “whisper campaign” against Schweich, who had a Jewish heritage, but was a Christian who attended an Episcopal church. Schweich had told political colleagues, family, friends and journalists that he was the target of the campaign, according to the Post-Dispatch.

Jackson said Hancock, who didn’t support Schweich’s candidacy, doesn’t represent the values of the state Republican party, according to KMOV.

Clayton police said last week that they found no evidence that Schweich was a target of political bullying or a whisper campaign, according to KMOX.

Hancock has denied doing anything wrong, saying he may have mentioned Schweich was Jewish, but not out of malice. In a statement on the state GOP’s website, Hancock said:

In the end, I agree with Jack Danforth. Anti-Semitism and bigotry have no place in the Republican Party. They have no place on this planet. And I am grateful for the many who have defended me against false charges just as vigorously as Senator Danforth once defended a friend who was nominated for the United States Supreme Court. Now, I hope to put this tragic time behind us. It is clear there was no whisper campaign, and it is time to move on. I intend to continue working to unify our party during this critical time in our nation’s history.

4. Police Are Looking Into Whether the Suicides Are Connected

Police in Jefferson City said at a press conference they have reached out to Clayton investigators, who are still looking into Schweich’s death.

According to the Post-Dispatch, police Capt. Doug Shoemaker said:

We’re very aware of the political issues surrounding Mr. Schweich’s death and within a month, we have the death of his spokesperson. It is our goal and objective to do the best job we can for the family … We want to make sure we have some level of closure.

5. His Death Has Again Shaken the Missouri GOP

Like Schweich, Jackson was a prominent member of the Republican party in Missouri. He worked in the auditor’s office as Schweich’s media director starting in MAy 2011, and previously was communications director for Matt Blunt, the former secretary of state. He also worked on Blunt’s campaign for governor in 2004 and in his office in 2004 when Blunt was elected.

Hanaway, another Republican candidate for governor, told the Post-Dispatch, “Spence is someone who has worked for Republicans for a long time. (Jackson) was an extremely hard worker who cared deeply about the principles of the party.” 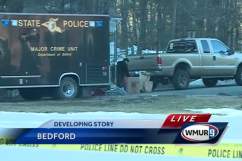