David Wildstein is scheduled to enter the plea Thursday in federal court in Newark, according to Bloomberg News.

Wildstein ordered lanes closed near the George Washington Bridge in September 2013, causing traffic jams in Fort Lee, New Jersey after an email from Christie aide Bridget Anne Kelly that said only “time for some traffic problems in Fort Lee.”

The exact charges he will plead guilty to aren’t yet known, Bloomberg reported Wednesday.

1. A Grand Jury Had Been Hearing Evidence About the Scandal For 4 Months

David Wildstein, right, with his attorney, Alan Zegas, while Wildstein was testifying before the New Jersey Assembly’s Transportation Committee. (Getty)

According to Bloomberg, a grand jury has been hearing evidence from U.S. Attorney Paul Fishman for four months. Wildstein would be the first to be convicted in the scandal investigation.

2. He Was Appointed to His Position at the Port Authority By Christie

He resigned from his position as a result of the scandal.

3. His Attorney Previously Said the Governor Was Aware of the Lane Closure Plan

Wildstein’s attorney, Alan Zegas, previously said that Christie was aware of the lane closures before they happened, according to Bloomberg.

The scandal tarnished Christie’s reputation despite the fact he denied any role in what happened. The Republican governor is weighing a run for president.

4. Emails Revealed the Conspiracy to Close the Lanes

In September 2013, the Port Authority closed lanes to the George Washington Bridge for a “traffic study.” The closures had disastrous effects on traffic heading from Fort Lee in Democrat-dominated northern New Jersey to New York City.

It did not take long before people began suspecting the unplanned closures were political retribution because the Democratic Mayor of Fort Lee, Mark Sokolich, refused to back Christie’s campaign for re-election. 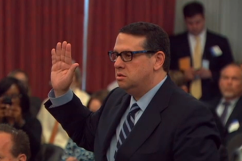 5. He & Christie Were Childhood Friends

Chris Christie and Wildstein attended the same high school. While in school, according to a long article published by NorthJersey.com, Wildstein became politically active and even worked as a campaign volunteer with Christie. Despite their proximity, Christie maintains that the two knew each other but were not “friends.”