Freddie Gray’s twin sister Fredericka Gray is embraced by family and supporters during her brother’s funeral the New Shiloh Baptist Church during his funeral . (Getty)

The twin sister of 25-year-old Freddie Gray has spoken out against the violent protests and rioting that have erupted in Baltimore after the death of her brother, who was mortally wounded in early April while in the custody of city police.

1. She Said Her Brother ‘Would Not Want This’

Fredericka Gray was the first in her family to make public comments in the aftermath of Gray’s death, joining Mayor Stephanie Rawlings-Blake on Saturday after peaceful protests turned into skirmishes with police and some vandalism.

“My family wants to say, can you all please, please stop the violence?” Fredericka Gray said at the press conference. “Freddie Gray would not want this.”

Freddie, the son of Freddie Sr. and Gloria Darden, had another sister, Carolina. 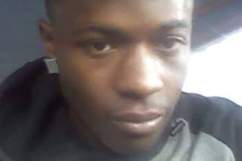 2. She Spoke Out Again After Protests Turned Violent

“I don’t think that’s for Freddie,” Freddie Gray’s twin sister Fredericka Gray said of the Monday rioting. “I think the violence is wrong.”

‘I am sure that the family is concerned, and I am positive that they are against what is beginning to develop here in town. They don’t deserve this any more than Freddie Gray deserved it’ he said about the injured officers.

3. Fredericka & Her Brother Grew Up in One of the Poorest Parts of Baltimore

Fredericka and Freddie Gray lived in the Sandtown-Winchester neighborhood, one of Baltimore’s poorest areas.

Their family sued their landlord over lead paint that was in their home. In the lawsuit, they claimed Freddie and his sisters suffered from lead poisoning, according to the Baltimore Sun. The lawsuit was settled.

4. The Riots in Baltimore Came the Same Day of Freddie Gray’s Funeral

Fredericka Gray, in sunglasses, at her brother’s funeral. (Getty)

The family had asked for no protesting or demonstrations on Monday as Gray was laid to rest. They had also called for protests to remain peaceful.

According to The Associated Press, thousands attended the funeral.

Family and dignitaries unite for Freddie Gray's funeralFamily members, friends and several dignitaries spoke and commented on the life of Freddie Gray at his funeral.2015-04-27T18:34:29.000Z

5. The Investigation Into Freddie Gray’s Death Is Still Ongoing

Gray was arrested April 12 by four officers outside a public housing complex. Police have not yet said why Gray was arrested. Police said four bicycle officers tried to stop Gray for an unspecified reason and he ran from them. They caught him and detained him while waiting for backup.

Mayor Stephanie Rawlings-Blake said on Twitter on Sunday, “Right now we are still collecting details surrounding this incident, but I want our residents to know that we will get answers.”

My thoughts and prayers are with the friends and family of Freddie Gray during this difficult time.

Police Commissioner Anthony Batts said at a press conference that “all lives matter,” after issuing sympathies to Gray’s family.

Read More
5 Fast Facts, Baltimore, Breaking News, freddie gray, Maryland, Police
Fredericka Gray, the twin sister of Freddie Gray, has called for an end to violent Baltimore protests, saying it is not what her brother would have wanted.