Cargo ships in the Strait of Hormuz in a file photo. (Getty)

A U.S. Navy warship and planes are responding to a distress call in the Strait of Hormuz after Iranian forces fired a shot across the bow of a commercial cargo ship, the MV Maersk Tigris, and forced it into Iranian-controlled waters. Meanwhile, the Pentagon is denying reports that the ship that was seized is American.

The Iranian forces boarded the ship at about 9 a.m. GMT, Reuters reports.

It was initially reported that the seized-ship was American. The ship is based in the Marshall Islands, which receives protection from the United States.

According to a report by the Saudi-owned Al Arabiya News Channel, the ship was American and has 34 crew members aboard who are United States citizens. Other reports from the Pentagon say there are 27 on board, none of whom are American citizens.

But United States officials have so far denied that an American ship was involved, though the Pentagon says it is monitoring the situation according to the BBC.

The ship was directed into the Bandar Abbas port on the southern coast of Iran, according to the report.

1. The U.S. Provides Military Defense to the Marshall Islands, Where the Vessel Is Based

The Pentagon has identified the ship as the MV Maersk Tigris and says no Americans are believed to be on board, according to Reuters. The ship is based in the Marshall Islands. Maersk is based in Denmark.

The Marshall Islands receives financial support and military defense from the United States as part of an agreement between the two nations, according to the State Department. That is one of the reasons the vessel would have called the U.S. Navy for assistance, although the American Navy generally provides security to commerce globally.

“We do have certain obligations and we’re working through that,” said Pentagon spokesman Mark Warren, about the United States’ responsibilities to the Marshall Islands.

The USS Farragut destroyer and American planes are responding to the distress call from the Maersk Tigris, CNN reports.

The ship, which was about 60 miles away, has been in contact with American forces in the area and was ordered to head toward the area.

The aircraft were ordered to monitor the situation. Pentagon spokesman Colonel Steve Warren said it is “to be determined” what the Farragut will do when it arrives at the incident, according to CNN.

2. The Pentagon Says it ‘Was Inappropriate’ For Iranian Forces to Fire the Warning Shot

Iranian Revolutionary Guards drive a speedboat in front of an oil tanker during a ceremony to commemorate the 24th anniversary of the downing of Iran Air flight 655 by the US navy, at the port of Bandar Abbas on July 2, 2012. (Getty)

According to Al Arabiya, Iranian forces fired at the ship. The Pentagon told Reuters that the forces boarded the ship after patrol boats fired shots across its bow and ordered it deeper into Iranian waters.

“The master was contacted and directed to proceed further into Iranian territorial waters. He declined and one of the IRGCN craft fired shots across the bridge of the Maersk Tigris,” Pentagon spokesman Colonel Steve Warren told CNN. “The master complied with the Iranian demand and proceeded into Iranian waters IVO Larak Island.”

Warren said it was “inappropriate” for the Iranian forces to fire the warning shot.

The IRGCN is the Iranian Revolutionary Guard Corps Navy.

The Iranian news agency Fars said the ship was seized because of a financial dispute.

“The ship is a trade vessel and has been seized by the Iranian navy at the request of Iran’s Ports and Maritime Organization,” a source told Fars. “The ship was seized after a relevant court order was issued for its confiscation.”

Fars continued to claim that the ship is U.S.-owned. 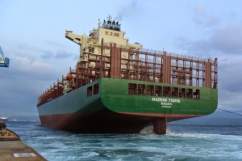 3. The Ship Was Traveling From Saudi Arabia to the UAE

Tracking data shows the 65,000-ton container ship off the Iranian coast near the islands of Qeshm and Hormuz. It was set to sail from the Saudi Arabian port of Jeddah to the United Arab Emirates port of Jebel Ali.

The Pentagon told Reuters that the ship was traveling across the Strait of Hormuz when it encountered the Iranian forces.

The ship was in international waters when the Iranians approached it, according to Rickmers Ship Management, the ship’s manager. Cor Radings, a spokesman for Rickmers, told Bloomberg it’s not clear to them why the ship was boarded and he said they are trying to reestablish contact with the ship.

The Strait of Hormuz is a channel separating Oman and Iran. It connects the Gulf’s biggest oil producers, like Saudi Arabia, with the Gulf of Oman and the Arabian Sea. It is 21 miles across at its narrowest point and has 2-mile wide channels for inbound and outbound shipping, along with a 2-mile wide buffer zone.

4. An American-Owned Ship Was ‘Surrounded’ By Iranian Forces Last Week

Tuesday’s incident brought forward information from the U.S. Navy that a U.S.-flagged ship was in fact intercepted by Iranian forces last week.

On April 24, four Iranian vessels surrounded the Maersk Kensington in the Strait of Hormuz, the Navy told CNN.

A senior U.S. military official told CNN, “the Iranians encircled the Kensington and followed the ship on its course for a period of time before withdrawing and breaking away.”

He said no shots were fired during that incident. The U.S. Navy Fifth Fleet then issued a notice to mariners about the incident, according to CNN.

“We have been in communication with U.S. shipping industry representatives with regards to how their vessels should respond to threatening encounters with foreign naval forces and how to contact us, ” the U.S. official told CNN.

5. Iran Has Threatened to Block the Strait of Hormuz in the Past

Ships are seen in the Strait of Hormuz off the Oman coastline. (Getty)

Iran has previously threatened to block the Strait of Hormuz over sanctions to its nuclear program, according to Reuters.

In 2011 and 2012, Iranian officials used the important oil-trade route as a way to prevent further sanctions, the BBC reported at the time.

Vice-President Mohammad Reza Rahimi said “not a drop of oil will pass through the Strait of Hormuz” if sanctions were put in place. The Iranian navy chief said it would be “easy” to close the strait.

Read More
5 Fast Facts, Breaking News, Iran
wpDiscuz
6
0
Would love your thoughts, please comment.x
()
x
| Reply
A U.S. Navy destroyer is responding in the Strait of Hormuz after Iranian forces fired a shot across the bow of a cargo ship and forced it into Iranian waters.