Police say a 14-year-old girl in Pennsylvania coerced her then-20-year-old boyfriend into killing her mother because the mom didn’t approve of their relationship. That teen has been named as Jamie Silvonek. Her boyfriend is Fort Meade Army soldier Caleb Barnes. Both are now charged with homicide in the case.

1. After Her Mother Told Jamie Silvonek to End the Relationship, the Teen Texted Barnes & Said ‘I Want Her Gone’

In March 2015, both Silvonek and Barnes were arrested after the body of Cheryl Silvonek, 54, was found in a pond close to Philadelphia, reported the Allentown Morning Call at the time. The prosecutors stated that Silvonek was furious at her mother, Cheryl, because Cheryl didn’t approve of her teen daughter dating Barnes, who was 20 years old. The probable cause affidavit states that Jamie Silvonek had told Barnes to tell her mother that he was 16-and-a-half, despite the fact Cheryl had seen through his Facebook that he was 20. The teen said that he should tell her mother that he lied about being 20 due him wanting to avoid teasing in the army. The docs say that Jamie had told Barnes that she was 17. Text messages that are published in the documents show that Barnes had been shown his girlfriend’s passport and that he knew she wasn’t 17. The teenager maintains the lie. It’s not clear from the affidavit if Barnes definitively knew how old Jamie Silvonek is. In one message, when the teenage suspect is complaining about her mother, she writes to her boyfriend “I want her gone.”

2. The Day Before Her Mother Was Stabbed in the Throat, Jamie Silvonek Had Just Taken Her SATs

In the affidavit, it’s stated that Barnes told police that on March 14, Cheryl Silvonek drove Jamie and Barnes to a Breaking Benjamin concert in Scranton, Pennsylvania. After the gig, Barnes says he stabbed Cheryl Silvonek in the throat multiple times, while Jamie Silvonek sat in the back seat. Her mother died almost instantly.

After the stabbing, authorities say the couple went to Walmart where they bought bleach and other cleaning supplies to clean out their car. During interviews with police, it’s stated that she told investigators that Barnes had forcibly raped her. The documents state that while in the Walmart store, Jamie Silvonek, showed no signs of being under duress, despite her lawyer’s claims that she was fearful of Barnes.

Cheryl Silvonek’s body was discovered after 4 a.m. on March 15 by a someone who lives close to the pond in the South White Hall Township.

When Jamie Silvonek was arrested, she was naked in her room with her boyfriend at her home in the Upper Mancungie Township. After initially denying any knowledge of her mother’s whereabouts, eventually, she admitted where her mother was buried and she told police that Barnes had stabbed her.

You can read the full documents in the case above.

On the same day as the killing, Jamie Silvonek had taken the SAT test, according a post on her Twitter account. She’s in the eighth grade.

3. She Was 13 When She Started Her Relationship With Barnes

The young couple first met in October 2014 at a Self Help concert in Philadelphia. At the time, Silvonek told Barnes that she was 17 years old, not 13, as she was then. The two spoke daily via text and online. At some point between October and March, Barnes also began visiting Silvonek. He’s a native of El Paso but was stationed in Fort Meade, Maryland, reports the Associated Press. He first enlisted in February 2012. On her Twitter page, she describes herself as an “Incurable optimist with an insatiable thirst for knowledge and a ravenous appetite for adventure. Open-minded secular humanist.” She then has the word “Caleb” followed by a heart.

4. Cops Say the Pair Were Also Planning to Kill Her Dad

The probable cause affidavit states that the initial plan had been for Barnes and Silvonek to kill not only Cheryl, but also the teen’s father, David. A witness told police that she heard the two conspiring to the kill Silvonek’s parents and live off of the life insurance money. On March 14, Jamie Silvonek texted her father to see what time he would be home from work. When police came to arrest his daughter, David Silvonek was asleep at home. According to Cheryl Silvonek’s obituary, she also has a son, Alex, who is a student at Duquesne University.

5. She’s Being Charged as an Adult

The Associated Press reports that on April 17, a judge in Pennsylvania rejected calls for Silvonek to be moved to a juvenile facility. Though she’s in an adult prison, she’s being kept away from older inmates.

Caleb Barnes has been charged with criminal homicide and abuse of a corpse. He was charged with statutory sexual assault in the case but that was withdrawn.

Silvonek is charged with criminal homicide, abuse of a corpse, tampering with evidence and hindering apprehension. Her lawyer, John Waldon, told a Pennsylvania court on April 17 that his client must have been under “some type of duress or coercion,” reports the Associated Press. Her lawyer added that Silvonek fears for her life and the life of her father, and that she weeps when she talks about her mother. He previously alleged that the initial questioning of Silvonek was illegal as there was no legal guardian present. 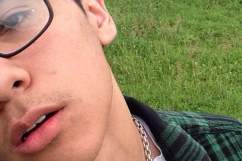 Loading more stories
wpDiscuz
8
0
Would love your thoughts, please comment.x
()
x
| Reply
Police say a 14-year-old girl in Pennsylvania coerced her 21-year-old boyfriend into killing her mother because the mom didn’t approve of their relationship.