A Baltimore City Paper photographer was assaulted and detained by several Baltimore police officers while covering the protests over the death of Freddie Gray.

The protests became heated Saturday night, a week after Gray died while in the custody of Baltimore Police. Several officers are under investigation as a result of Gray’s death, but many details of what happened aren’t yet known.

J.M. Giordano was tackled and beaten by the officers outside of the Western District headquarters, according to the City Paper. The arrest was filmed by another newspaper employee, managing editor Baynard Woods, who can be heard in the video yelling to the officers, “He’s a photographer! He’s press!”

Me being beat on by several @baltimorepolice. Video by Baynard woods. #freddieGray #baltimore

Giordano said the incident started when someone among the protesters threw a rock at the officers, hitting one of their riot shields. His described to his newspaper what happened next:

‘They mobilized,’ he says. The police line moved forward and Giordano did not move fast enough for them. ‘I always move at the last second,’ he says. Five or six police officers in riot gear hit Giordano and the other protester with their shields, knocking them to the ground.

‘They just swarmed over me,’ he says. ‘I got hit. My head hit the ground. They were hitting me, then someone pulled me out.’

Giordano, who suffered minor injuries, also responded to the incident on Twitter:

31 adults and four juveniles were arrested during the protests, Baltimore Police said. They blamed most of the violence on outside agitators, though most of the arrests were of local people.

Police also acknowledged the detention of Giordano and the arrest of Reuters photographer Sait Serkan Gurbuz, who was near Giordano:

As officers attempted to disperse protestors engaged in violent activity in the Western District, two members of the media were inadvertently detained. One journalist was released with a criminal citation, which is being recalled. One journalist was released without any charges. The Baltimore Police Department continues to make every effort to ensure that members of the media have access to officers as they protect the rights of protestors to engage in peaceful demonstration. Active scenes of violence are often confusing and chaotic. The Baltimore Police Department apologizes for the error and will continue to make efforts to grant media access wherever possible. 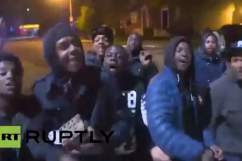 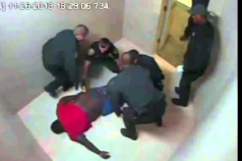 Loading more stories
wpDiscuz
0
0
Would love your thoughts, please comment.x
()
x
| Reply
A photographer for the Baltimore City Paper was assaulted and detained by several city police officers during protests over the death of Freddie Gray.