Police in Winnipeg have arrested a man they believe is responsible for the spate of homeless murders in the city over the last month. John Paul Ostamas, 39, has been charged with three counts of murder, according to police. The slain men have been named as Donald Collins, 65, Stony Stanley Bushie, 48, and Myles Monias, 37.

1. There’s No Clear Motive for the Killings, According to Police

Ostamas is from the Aboriginal tribe the Eabametoong First Nation in Ontario, some 400 miles north east of Winnipeg. In a press conference, announcing Ostamas’ arrest, police said there was no clear motive for the crimes. According to the Winnipeg police, Ostamas is “very transient” and has had very little contact with local police but that he is still facing a domestic violence charge in the city stemming from March 2015. He’s lived in Winnipeg “on and off” for the past ten years. The Winnipeg Free Press reports he has been arrested multiple times for assault in Ontario, the first in 2002. 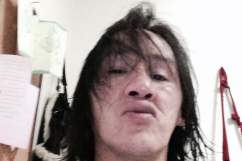 2. Police Described the Killings as ‘Brutal’

He was taken into custody on April 27, reports Global News. The first victim, Myles Monias, was attacked on April 10. He was found beaten in a bus shelter, Monias died later at a local hospital on April 15. The others were found dead on April 25. Police described their killings as “brutal.” Bushie was found in an alley in the city first with Collins being found in a similar condition in another alley a few blocks away that same night. The alley where Bushie was found was just behind the headquarters of the Aboriginal Peoples Television Network.

Surveillance video stills were released to the public on April 26 showing a possible suspect. Those pictures came from the Aboriginal Peoples Television Network. When announcing the charges against Ostamas the Winnipeg police tweeted “We extend our thanks to the downtown business community which assisted by sharing surveillance footage. Images captured helped ID Ostamas.”

3. Ostamas Says on Facebook That He Has a Baby Due in July

According to his Facebook page, Ostamas is a heavy drinker. He also frequently posts links to old school gangster rap videos. On his Google Plus page, he says he lived in Los Angeles. On his Facebook, he says his job is “Self Employed Entrepreneur.” He adds that he studied at New York Medical College in Valhalla, New York. On the “About” section, Ostamas says:

Im very athletic out going person loves too keep an organized scedule and love to go hiking and jogging especially love too excercise work on my physical and mentally conditioning.

He says he’s engaged to a woman named Lyla Bighettyand that he has a baby daughter due in July 2015.

4. One of the Victims ‘Would Never Start a Fight With Anyone’ While Another ‘Wanted a Better Life’

Martin Owens, chief of the Little Grand Rapids First Nation, told CBC that Bushie “was a good man.” He called him an old friend and said that Bushie would never “start a fight with anybody.” Bushie was fron the Little Grand Rapids, a First Nation community north of Winnipeg. He had come to the city in March 2015 for a medical appointment but hadn’t been heard from since. A homeless charity worker in Winnipeg told CBC that Collins “wanted a better life” and that the two “had probably gone through a lot of traumatic experiences in their past. But they were dealing with it. That was their life. That’s what they were content with.”

5. On the Days of the Killings, Ostamas Was Busy on Facebook

The day after Bushie and Collins’ bodies were found, Ostamas posted on Facebook:

In this ever changing world theres alot you can do you gotta do what you can in this trying times and you gotta know what to do in this life and chill in this place live life to the fullest its good to move forward in life you gonna be a sheep or wolf yea you gotta learn to live and survive in this life its and ever changing life we live it changes constantly it moves in a complex ways live it while you can.

On the day the bodies were found, he said on Facebook:

beautiful out there this morning it was a blast anyways I be chillin like always blood in blood out! actually liked that movie it was a blast from the past when I was living in the states and at this point im in Canada again chillin like a mutha fuka its all good am having my own fun alone while im single see how long that lasts and doing things to keep myself buisy at times just zoning on doing things back to the states for me after im done heer

Read More
5 Fast Facts, Breaking News, Crime
wpDiscuz
1
0
Would love your thoughts, please comment.x
()
x
| Reply
Police in Winnipeg have arrested man they believe is responsible for the spate of homeless murders in the city over the last month.