A terrified Sandra Bullock feared for her life as she hid in her bedroom closet after a stalker broke into her Hollywood home, a court heard on Thursday.

The Oscar-winning actress sounded panicked and tearful in a frantic call to police as the man wandered through her mansion.

A tape of the call was played to the Los Angeles Court during a hearing to decide whether alleged stalker Joshua Corbett will stand trial.

Bullock called for help after seeing a man inside her house heading for the attic, TMZ reported.

‘I’m in my closet. I have a safe door,’ she told the police dispatcher. ‘I’m locked in the closet right now.’

In the conversation as she waited for officers to arrive, the ‘Miss Congeniality’ star gave a description of the man she said she saw after getting up to investigate strange noises on June 8 last year.

‘I thought it was a wind blowing,’ Bullock said. ‘Then I saw the person.’

She told the dispatcher she wasn’t armed and that her son wasn’t at home at the time, but was clearly becoming increasingly alarmed at her predicament, asking of the police on their way: ‘Are they close?’

When a patrol car did arrive, she tried to let them in by opening the gates from her mobile phone, but it didn’t work.

“Now my phone is not working so maybe they know how to override my system,’ Bullock told the dispatcher.

Once they were in the grounds, she gave officers instructions on how to find her bedroom and when the officers got there, Bullock, sounding like she was in tears, thanked the dispatcher.

It was unclear whether she was hiding in a custom made ‘panic room’ designed to keep wealthy homeowners safe or if her refuge was simply a sturdy locked closet.

A police officer testified that Corbett was clutching a black notebook with a two-page letter to Bullock and magazine photos of the actress when he was arrested, reported the Daily Mail.

Security footage showed 39-year-old Corbett outside Bullock’s gate each of the three days before his arrest.

He’s facing 19 charges including first degree burglary, stalking, and possession of a machine gun. Corbett has pleaded not guilty and bail was set at (pounds) 1.5 million.

An arsenal of illegal weapons, including assault weapons, tracer ammunition and machine guns were found in a search of his home. He wasn’t armed when he was arrested at Bullock’s residence, said police.

Los Angeles Detective Christina Carlozzi read entries from Corbett’s notebook and a letter he wrote to Bullock the day before he was arrested at her home. He called Bullock his wife, professed his love, said he wanted to have sex with her and noted the security measures at her home.

‘There is two large impervious gates that no one can open but you,’ Carlozzi said, reading from Corbett’s notes. ‘I hope one day you open them to me.’

Bullock is not expected to testify during the preliminary hearing although she is likely to go into the witness box if Corbett goes to trial. 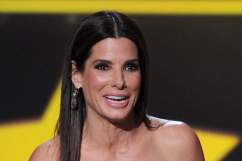 Read More
Audio, Breaking News, Crime, Sandra Bullock
Follow Heavy ↓
wpDiscuz
0
0
Would love your thoughts, please comment.x
()
x
| Reply
A terrified Sandra Bullock feared for her life as she hid in her bedroom closet after a stalker broke into her Hollywood home, a court heard on Thursday.