1. The pair were hanging out in New York on the night of April 17. TMZ reports that the two were riding in a car together with Jean telling police at some point Brim told her he wanted sex. When she refused, she says he grabed her breasts and vagina and told her “This belongs to me.” He refutes this story, saying Jean and threatened to make a false claim about rape if he got out of the car. Brim, despite the threat, tucked-and-rolled out of the car, injuring his arm and damaging his Rolex. After that, TMZ says that Jean went straight to police to report the sexual assault.

3. Steelo Brim grew up on Chicago’s notorious West Side. He moved to Los Angeles at the age of 19 to pursue a career in show business. There he met entrepreneur Rob Drydek. This led Brim to working for MTV on the shows Ridiculousness and Rob Drydek’s Fantasy Factory.

4. On the night of the alleged attack, Brim posted on Instagram that he was hanging out in New York with college athletes Bryce Sheldon and Marell Evans.

5. According to an interview (which, again, we won’t be linking to), Mary Jean says she studied fashion for seven years and graduated from cosmetology school before going into the adult industry. She says about the time:

I was flattered to go to cosmetology school and getting my license for it because now on set when they don’t provide hair and make-up, I can do it. I love what I do so I’m going to continue to do both. Do as much as I can; there’s enough hours in the day to do it all.

In that interview, Jean describes former First Lady Jackie Kennedy as a her “icon.” 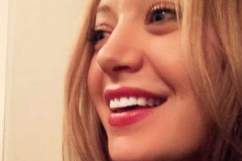