Actress and comedian Anne Stiller, who for years partnered with her husband, Jerry Stiller, to form a popular comedic team, has died at the age of 85 at her home in California, her family says.

Meara, the mother of actor Ben Stiller, died Saturday, according to The Associated Press.

“Anne’s memory lives on in the hearts of daughter Amy, son Ben, her grandchildren, her extended family and friends, and the millions she entertained as an actress, writer and comedienne,” her family said in a statement.

Meara was born in Brooklyn, New York on September 20, 1929 to Irish Catholic parents.

2. She Married Jerry Stiller in 1954 While They Were in an Improv Company

Meara married Jerry Stiller in 1954 while they were both members of the improvisational comedy company The Compass Players. They were paired together in many sketches as the team Stiller and Meara, and often used their real-life relationship as inspiration for their comedy.

The pair later became a popular act on the Ed Sullivan Show and other TV programs. They also wrote and performed radio commercials together.

In 2010 they starred in a Yahoo! web series called Stiller & Meara.

The Stiller family said in a statement to the AP, describing Jerry Stiller as her “husband and partner in life.”

“The two were married for 61 years and worked together almost as long,” the family’s statement said.

3. Meara Starred in a TV Series in 1975 & Earned an Emmy Nomination

Meara was the star of the 1975 television series Kate McShane on CBS. The show was cancelled after just 10 episodes, despite Meara earning an Emmy nomination.

She was also twice nominated for an Emmy Award for her supporting role in the Archie Bunker Show, and had three other Emmy nods, including for her guest starring role on Homicide: A Life on the Streets in 1997. She won a Writers Guild Award for the 1983 TV movie The Other Woman.

Meara joined her son, Ben Stiller, in the 2006 movie A Night at the Museum, and in Zoolander.

4. She Converted to Judaism After Marrying Stiller

Six years after marrying Stiller, she converted to Judaism, and took her new religion very seriously.

“You know, being married to Anne has made me more Jewish. She really believes in the belief system of Judaism,” Stiller told the Jewish Exponent in 2011. “Her observance of the holidays — I had taken them for granted.”

5. She Was in an Off Broadway Play in 2011 & Continued to Teach Acting Classes in Recent Years

Anne Meara and Jerry Stiller pose with their children Amy and Ben after being honored with a Star on the Hollywood Walk of Fame in Hollywood in February 2007. (Getty)

She taught a technique and scene study class at HB Studio until not long before she died, according to Broadway World. 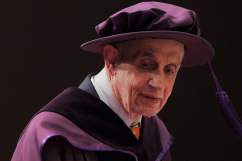 Loading more stories
wpDiscuz
1
0
Would love your thoughts, please comment.x
()
x
| Reply
Actress and comedian Anne Meara, the wife of Jerry Stiller and mother of Ben Stiller, has died at 85, her family says.