Videos show Baltimore Police pepper spraying and violently arresting a black protester wearing a “Fuck the Police” T-shirt. The arrest happened after the 10 p.m. curfew Saturday night. He was among a group protesting over the death of 25-year-old Freddie Gray in the area of North and Pennsylvania avenues.

The man, whose name hasn’t been released, is seen in a video, posted by RT, walking slowly toward the police line before an unnamed officer approaches him and pepper sprays him in the face. The man continues to stand in front of the line of police officers until one moves forward and throws him to the ground. Several other officers then move in and the man is detained and moved to a sidewalk.

Police told the Baltimore Sun that the officers called for a medic. They can be seen on video pouring water over his face.

Here is another angle of the video, posted by The Associated Press:

The 10 p.m. curfew was put in place after riots over Gray’s death last week. Baltimore Mayor Stephanie Rawlings-Blake announced Sunday she would be lifting the curfew. Six officers have been charged after an investigation into how Gray died.

Police said 42 adults and four juveniles were arrested after the curfew went into effect Saturday night.

On social media, many protesters and their supporters have pointed toward a contrasting video of Baltimore police dealing with white protesters in another neighborhood who were breaking the curfew.

The Baltimore Sun explained what happened when the group of white protesters stayed out after the curfew in Hampden:

At 10 p.m. the officers returned and the protesters were given a warning. Five minutes later, they were given another warning as more police began to stage in the area. “It’s five minutes after 10. This is your second warning,” police announced. Most of the protesters left. About 10:10 p.m., two officers talked to the few remaining protesters and gave them a final warning. By that point, a wall of dozens of Baltimore Police officers with shields and helmets lined up in formation. The few protesters looked nervous. The media were told to stand aside. The few protesters dispersed. Officers were told to stand down soon after. Nobody was arrested. 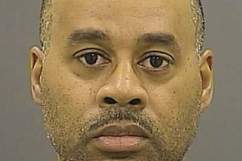