A 16-year veteran of the Baltimore Police Department has been charged with the second-degree murder of Freddie Gray, whose in-custody death sparked protests and violent riots.

Caesar Goodson, 45, is the only officer facing a murder charge in the case, but five other officers also face charges, ranging from involuntary manslaughter to false imprisonment. Five of the six officers are in custody.

1. Goodson Is Accused of ‘Extreme Indifference to the Value of Human Life’

According to charging documents, Goodson is charged with second-degree depraved heart murder, which carries a 30-year-penalty, as well as involuntary manslaughter, assault and misconduct.

Lorning Cornish celebrates in Baltimore on May 1 after the death of Freddie Gray was ruled a homicide, prompting criminal charges against six police officers. (Getty)

According to the Maryland Court of Special Appeals, “A depraved heart murder is often described as a wanton and willful killing. The term ‘depraved heart’ means something more than conduct amounting to a high or unreasonable risk to human life. The perpetrator must [or reasonably should] realize the risk his behavior has created to the extent that his conduct may be termed willful. Moreover, the conduct must contain an element of viciousness or contemptuous disregard for the value of human life which conduct characterized that behavior as wanton.” The piece adds, “The critical feature of ‘depraved heart’ murder is that the act in question be committed ‘under circumstances manifesting extreme indifference to the value of human life.”

The complete charges against all the officers, and the maximum possible penalties, are as follows:

Raf Sanchez of the Daily Telegraph reports that Goodson will first appear in court on May 27. He’s being held on a $350,000 bail.

When announcing the charges, Baltimore City State’s Attorney Marilyn J. Mosby said that Freddie Gray was “illegally arrested” and that there was no probable cause. When Mosby announced the charges, cheers and chants of “justice” erupted from the watching crowd. During her remarks, Mosby said that the knife that was found on Gray wasn’t an illegal switchblade. In a brief remark upon hearing about the charges, President Obama said it’s “absolutely vital that the truth comes out … justice needs to be served.” Maryland’s medical examiner officially ruled Gray’s death a homicide.

2. Goodson Is a Part-Time Mechanic Who Wanted to Retire From the Police Soon

ABC Baltimore reports that Goodson was known for being a part-time mechanic, specializing in Saab cars. He drives a restored Saab green convertible. Speaking to the station a friend called Goodson a “family man who likes to watch football.” He was working an overtime shift during Gray’s arrest. Raf Sanchez of the Daily Telegraph tweeted that in the past CitiBank took Goodson to court over money he owed.

Goodson is shown on the far left of this screengrab from CNN.

Goodson lives in the Baltimore suburb of Catonsville with his second wife, Paula. The Daily Mail reports that they have two daughters and a teenage son. His nephew, Antoine Goodson, is a football star at Northwestern Oklahoma State. His sister-in-law, Valencia Goodson, is the founder of Jug Nation, a black female empowerment group. 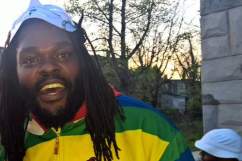 4. Goodson Drove the Van, & Gray Was Not Wearing a Seatbelt

Goodson was the driver of the van that transported Gray after his arrest. The Baltimore Sun reports that Gray wasn’t wearing a seatbelt during his ride in the van. Speaking to the Daily Mail, a source close to Goodson’s family said that the officer is distraught with himself for not checking if Gray was belted in. The cop is apparently adamant that there is an audio recording of him asking his fellow officers to make sure that Gray was properly secured.

Around 30 minutes after his arrest, Gray was unresponsive and in a coma. It’s thought by Gray’s family lawyer that he hit his head severely against the side of the van. The New York Times reports that, during initial interviews with the officers, the cops didn’t mention a stop the van made en route to jail. The Times adds that five of the six cops gave statements to investigators. Goodson refused.

5. The Fraternal Order of Police in Baltimore Has Questioned the State’s Attorney’s Integrity

In an open letter to state’s attorney Mosby (above), Gene Ryan, the Fraternal Order of Police president, said that Mosby’s relationship with the Gray’s family attorney, William Murphy, was distorting the case. The letter maintains the innocence of the accused officers.

According to authorities, Lt. Rice, who has been with the force since 1997, was the first cop to interact with Gray. After the two made eye contact, Gray ran. This resulted in his apprehension.

Freddie Gray in the process of his arrest. (Twitter)

Gray was arrested on April 12 and died at a Baltimore hospital a week later. His spinal cord was severed while he was in custody. Witnesses to the arrest at West Baltimore’s Gilmor Homes say he was assaulted by the arresting officers. Gray’s death prompted nights of rioting on the streets of Baltimore. Writing in the New York Daily News, Dr. David Samadi said that it was nearly impossible for Gray to have self-inflicted his injuries, as some have claimed.