The incident occurred in January, and the woman, Charlena Cooks, gave birth to a healthy daughter in March. The video was released by the American Civil Liberties Union of California (watch it above, the interaction with Cooks begins at about the 3:28 mark).

The city has stood by the officer, saying the video shows it is “apparent” that Cooks “actively resisted arrest.”

According to the Desert Dispatch, police responded to a local school after Cooks and a school employee got into an argument after the eight-months pregnant Cooks dropped off her second-grader. Cooks told the newspaper it was a “petty” altercation.

“I don’t even think that that disagreement in the parking lot was enough to warrant a call to the police,” she told the newspaper.

The video shows the arriving officers talking to the school employee, a white woman, who does not get asked for her ID and allows her to tell her side of the story. Cooks says the officers weren’t interested in hearing her side and demanded her ID.

Charlena Cooks talks on the phone before being taken down by Barstow police. (YouTube)

Cooks says she wants to call someone to ask if she has to identify herself. As she talks on the phone, the officer moves forward and grabs her, and then throws her to the ground along with the other officer, while Cooks screams that she is pregnant. The officer asks her why she is resisting arrest if she is pregnant.

“I don’t think I’ve ever been that terrified in my life,” Cooks told the Desert Dispatch. “I never saw that coming. I told him I was pregnant so he could proceed with caution. That didn’t happen and the first thing I thought was I didn’t want to fall to the ground. I felt the pressure on my stomach from falling and I was calling for help. But those guys are supposed to help me. But who is supposed to help me when they are attacking me?”

Charlene Cooks being held on the ground by the two officers. (Screenshot)[/caption

THE ACLU said it is a “wrongful arrest” for officers to arrest you for not showing your ID in California. Cooks was charged with resisting arrest, but the charges were dismissed by a judge.

“Even if an officer is conducting an investigation, in California, unlike some other states, he can’t just require a person to provide ID for no reason,” said Adrienna Wong, a staff attorney for the ACLU. “Officers in California should not be using the obstruction law, Penal Code 148, to arrest someone for failing to provide ID, when they can’t find any other reason to arrest them.”

The ACLU questioned whether race played a role in the treatment of Cooks.

“Imagine getting wrestled to the ground and handcuffed in front of your child’s elementary school,” ACLU staff attorney Jessica Price said. “Imagine interacting with other parents afterwards. Imagine what kids who saw the incident tell your child. And if you think the whole incident happened because of your race, how does that impact your view of police?”

Cooks being questioned by police after the takedown. (Screenshot)

The video was released by the ACLU while it also announced a $30,000 settlement between the city and two brothers who were arrested for refusing to identify themselves to officers.

“The Barstow Police Department continues to be proactive in training its officers to assess and handle interactions with emotionally charged individuals while conducting an investigation, for the protection of everyone involved,” the city said in a statement to the Desert Dispatch. “”This incident was in no way racially motivated, as implied by the ACLU. Barstow is a racially diverse community, as is our Police Department, and we affirm our Police Department’s commitment to protect and serve all of our residents.” 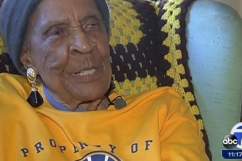 Loading more stories
wpDiscuz
76
0
Would love your thoughts, please comment.x
()
x
| Reply
Body camera footage shows two Barstow, California, police officers throwing a pregnant woman to the ground onto her belly after she refused to give them her name.