The May 13 Google Doodle celebrates a revolutionary female scientist from Denmark. Seismologist Inge Lehmann most famously discovered that the earth has an inner core as well as outer during her research into earthquakes. It was her work that showed the earth’s core is not a single roasting molten sphere but that it’s separated into an inner and outer core. She came to this conclusion in 1936 after studying the graphs from an earthquake in New Zealand in 1929.

A colleague commented on her work in 1971 saying “no amount of computerization” could replace her meticulous work. She passed away in 1993 at the age of 105.

1. She Went to a High School That Treated Boys & Girls Equally, Unheard of in the Early 20th Century

According to her profile at the American Natural History Museum website, Lehmann’s first real education at a mixed high school in her native Copenhagen, Denmark. It was the country’s first co-educational school and was regarded as pretty progressive. Not really surprising when you consider it was founded by Hanna Adler, aunt to famed progressive physicist Niels Bohr. Later in her life she was surprised by the lack of equality in the world, telling historian Stephen Brush in 1980 that there was “No difference between the intellect of boys and girls was recognized, a fact that brought some disappointments later in life when I had to recognize that this was not the general attitude.”

Lehmann was born by the lakes on the outskirts of Copenhagen on May 13, 1888. Her father, Alfred, was the professor of psychology at the University of Copenhagen. The rest of her family were similarly famed with one of her grandfathers being the Governor of Denmark’s National Bank. Oatmeal helped to generate her interest in the earth and its movements. She recalls in a profile by UCLA that her aunt kept information on earthquakes in oatmeal boxes “With her cardboard cards and her oatmeal boxes, Inge registered the velocity of propagation of the earthquakes to all parts of the globe. By means of this information, she deduced new theories of the inner parts of the Earth.”

2. She Was Known as ‘The Master of a Black Art’

Upon receiving an award from the American Geophysical Union in 1971, Professor Francis Birch in his oration, said:

The Lehmann discontinuity was discovered through exacting scrutiny of seismic records by a master of a black art for which no amount of computerization is likely to be a complete substitute.

She had worked in geology since 1925 when Lehmann took a job at the Danish Geodetic Institute. This was after studying mathematics at the University of Copenhagen and working in actuary. Lehmann was eventually appointed chief of the DGI, a role she held until 1953. During this time, she traveled the world learning about the latest advancements in geology. Strangely, she become among the foremost authorities on earthquakes in a country that doesn’t really have any history of seismic activity.

3. There’s Isn’t a Bridge Named After Her in Florida

Despite confusion emanating from Lehmann’s Wikipedia page, there isn’t a bridge named after her in Aventura, Florida. There is a bridge in the town named The William Lehman Causeway, commonly shortened to the Lehman Causeway. Presumably there is where the rumor started. The bridge extends on to the U.S. 1 highway. In terms of real success in America, in 1964 she was awarded a Doctorate of Science from New York’s Columbia University. Then, in 1997, the university created an award in her honor.

4. She Railed Against the Incompetent Men She Had to Deal With Throughout Her Career

The University of Cambridge where Lehmann studied. (Wikipedia)

Among her most notable feminist outbursts came during her time as chief of Danish Geodetic Institute when she said “You should know how many incompetent men I had to compete with–in vain,” according to a profile at the website for Purdue University.

5. Despite Being Blind Later in Life, She Lived as if ‘Nothing Had Changed’

Lehmann was the first female recipient of the William Bowie Award. (Wikipedia)

In her later life, she lived in her native Denmark in what’s referred to as a “summer cottage” by her UCLA profile. It’s noted that despite needing help to function, she tried her best to live as if nothing had changed. In 1988, to mark her 100th birthday, she attended a function at the Danish Geodetic Institute. Danish writer Nils Groes wrote of her in the UCLA profile:

One day at the hospital, Inge told us that all day she had been thinking about her own life and she was content. It had been a long and rich life full of victories and good memories. 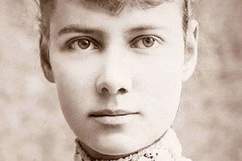 Loading more stories
wpDiscuz
36
0
Would love your thoughts, please comment.x
()
x
| Reply
A revolutionary female scientist is celebrated in the May 13 Google Doodle.